Over the last four years, we have argued that the glamour monopoly technology companies have a low multiplier effect in the U.S. economy. At the same time, home ownership and the creation of new homes has historically been a powerful driver of economic activity. With interest rates normalizing and the stock market punishing the prior financial euphoria, how can we invest to succeed in the coming five to ten years? What does the chart below tell us about how much the stock market will impact the economy in the coming years? 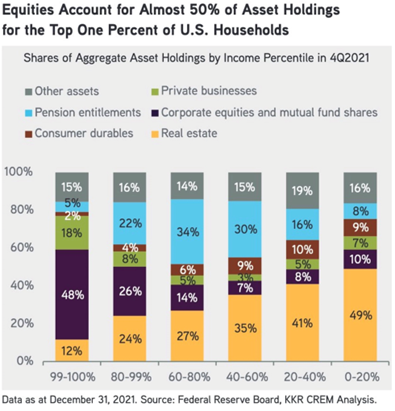 What got us started thinking about this subject was a tweet from the writer, John Authers. He wrote on September 14, 2020 that Apple’s (AAPL) market capitalization exceeded the FTSE 100 Index. He also determined that the capital spending at Apple (AAPL) was $7 billion versus the FTSE 100 companies at $100 billion. To us, this meant that the FTSE 100 companies were approximately 14 times as impactful on other businesses than Apple was. In other words, Apple had a low multiplier effect in the U.S. economy.

The spending of these wealthy folks has caused an explosion in the price of vacation homes and desirable weather locations around the country. We read all the time about the third or fourth home of the top 1% of income earners. At the same time, you see loads of spending on expensive jewelry and art, spendy vacations and other luxury items.

The next 19% of income earners also got hit by the decline in tech stocks with 26% of their assets in common stocks, but their pension assets and real estate holdings add up to 46% of their net worth. They don’t like what’s happened in the stock market, but it is unlikely to impact their spending behavior as much as the mega-wealthy folks.

The vast mid-section of households has seen their assets dominated by pension assets and real estate. The bottom 40% of income earners’ assets are dominated by real estate and other assets. What can we draw from this information to determine economic growth going forward?

First, our population is loaded with 90 million millennials who are parked between 27 to 42 years of age. They have the largest concentration of college degrees in history, and have been slow to marry and to have children. Millennials had been slow to buy homes until COVID-19 quarantines hit and they suddenly found themselves working from home. Their spending is likely to become necessity driven by household formation and child-bearing activities.

Second, wages are going to rise for the bottom 60% of wage earnings as their services are in demand and their bargaining power in the marketplace is enhanced. Lately, you see an Apple store choose to unionize or a Starbucks or Amazon location have its employees band together to lift their wages. Just look at what happened in the 1970s as inflation developed in a circular fashion. Prices for goods and services rose, so folks asked for pay increases that kept pace with inflation. In college, we studied Cost-Push and Demand-Pull inflation because they were working at the same time.

Third, the fewest number of Americans are underwater on their house in history and the number of questionable loans is among the lowest percentage on record. Average folks are in great shape. Their other assets (savings accounts) are high and their bargaining power in the economy is the highest in decades!

Let’s put this all together. Are we optimistic about the economy for the next ten years? Yes, we are. Does tightening credit to get in the way of inflation create a temporary roadblock to our long-term thesis for industries like homebuilding and mall REITS? Yes, it does. However, does this transition lay the groundwork for a strong era for average Americans and the U.S. economy? If we build houses and cars for newly formed households, it is highly likely.

Should we weep for the wealthiest Americans as they get clobbered on what they own in common stocks and other related assets? The answer is no! They don’t need the money and they don’t have a tendency to cause other folks in society to benefit in proportion to their success.

The moral of the story is to not lose your enthusiasm for common stock ownership because market leadership is changing. As always, fear stock market failure.

This Missive and others are available at www.smeadcap.com.4.9