“The main purpose of the stock market is to make fools of as many men as possible.”

In a recent interview by CNN’s Fareed Zakaria with Bill Gates the founder of Microsoft, Gates reflected on the wizardry of Steve Jobs and his ability to “cast spells on people.” Since Gates was a tech-magnate in his own right, his “minor wizard” status gave him the ability to identify the spells Jobs cast on employees and the world at large. Gates used the example of a company called NeXT, which Steve Jobs founded and according to Gates made very expensive computers which were “complete nonsense and yet he [Jobs] mesmerized those people.” Steve Jobs succeeded in attracting attention and wonder around NeXT so effectively that Apple bought it in 1996.

While Steve Jobs is no longer with us and Bill Gates retired long ago, casting spells remains well represented in the Federal Reserve Board’s toolbox and the market appears spellbound by it. The Chairman of the Federal Reserve Board, Jerome Powell, has held a dovish view ever since he capitulated on hiking rates in January. His messaging has been so effective that the market is currently expecting a 100% chance of an interest rate cut this year. Can you see the warning lights going off? Any time you see a 100% number on anything relating to economics or markets is a good time to check in with the consensus to look for fallacies that can be capitalized on. Bernard Baruch, a financial wizard of the early 20th century himself, might remind us that we have “as many men as possible” lining up for the market to exercise its purpose of making fools. 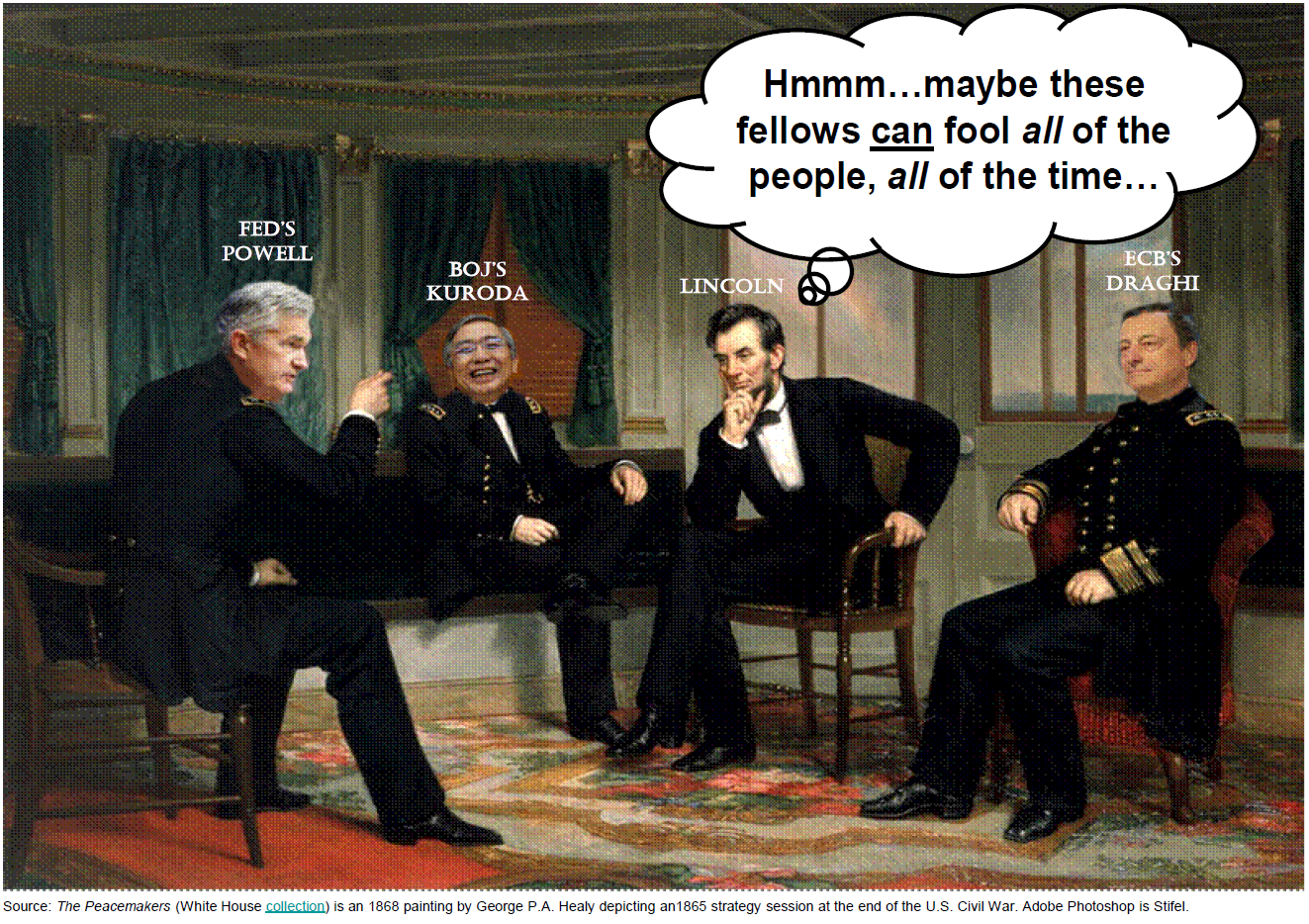 Worse for the “many men,” the bond market is putting its money where its mouth is. The portfolio underlying the most followed bond index in the world is currently extended in owning the longest-term bonds it ever has. The market may be right about Powell lowering rates, but that crowded trade may lose plenty of money being right! 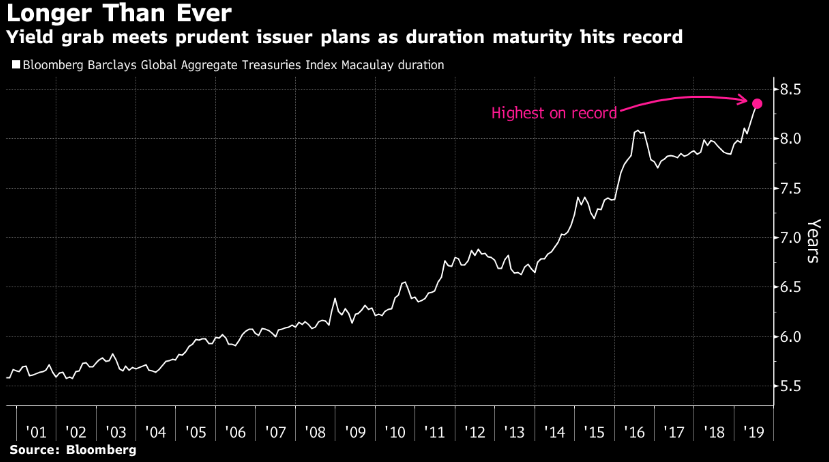 Leaving aside speculation of whether politics has influenced the Fed, the Fed’s posturing to stimulate an economy already running full steam makes about as much sense as alcohol after midnight at a frat house. In market speak, this looks like misallocation graduating to the college of malinvestment and we’re seeing it all over the place. It gets right back to the wizardry of chasing growth at nearly any price because of the belief that growth is scarce and those that run the leading tech companies are infallible. If that sounds like the last 10 years, you’re listening. This also describes the stock market so far in 2019 and we can’t know when it changes, but market history ensures it will.

Using Bernard Baruch’s logic, what could catalyze the market in fulfilling its purpose of fooling the masses? Hot clues always lie in the risks no one is thinking about rather than the wizardry right in front of their face. There are factors not even on the radar. Think oil at $12 a barrel in 1999 when no one cared, or credit risks that weren’t considered as the real-estate party roared into early 2006. How about 1989 when Japan was the new economic-miracle that was going to lead the world, only to spend three decades in the doghouse? China gained similar affection up until its peak in 2008-2011 and has been in a bear market ever since. It’s always the unseen risks that cause markets to find new direction, change leadership, and shift the pendulum from greed to fear and complacency to action. At the end of the cycle, they’re chasing the wrong wizards.

Today, no one is thinking about the next generation of Millennials being economically dominant or the wizardry behind them aggregating their household interests. Instead, the focus is on the $1.5 trillion of student debt that the media is sure will bury them, even though the average graduate earns 56% more than those without a degree. How about inflation? Inflation is a word that use to be in the investment dictionary and even Jerome Powell talks of an incredibly strong and healthy consumer. Consumers comprise 70% of the U.S. economy (50% essentials and 20% discretionary), both in terms of spending and confidence levels. His eloquence in effect is casting a spell over the bond market. Still, no one believes it’s a risk, although today’s Millennials will statistically assume 4x more debt into their households over the next decade based on normalized formation activities among 30-45 year old Americans in prior generations. Housing affordability? It remains elevated in a handful of the popular metro areas, but nationally the burden of housing as a percent of income is as low as it’s been in decades even as housing supply is at historically low levels. 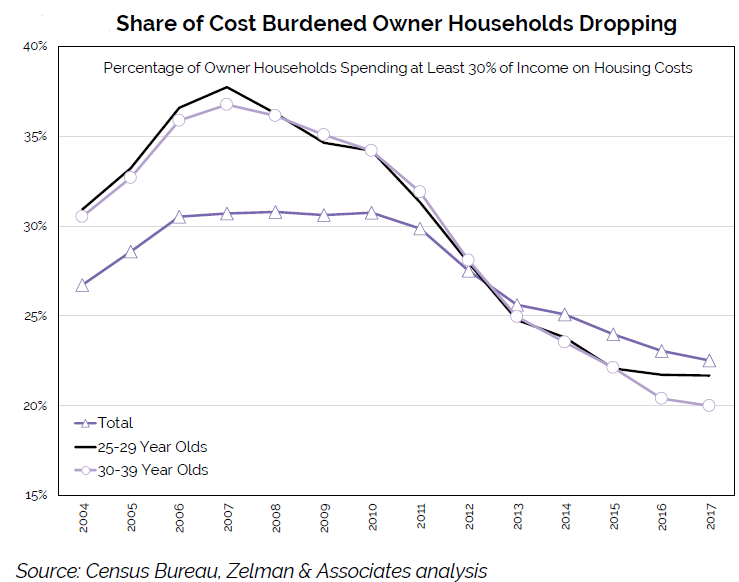 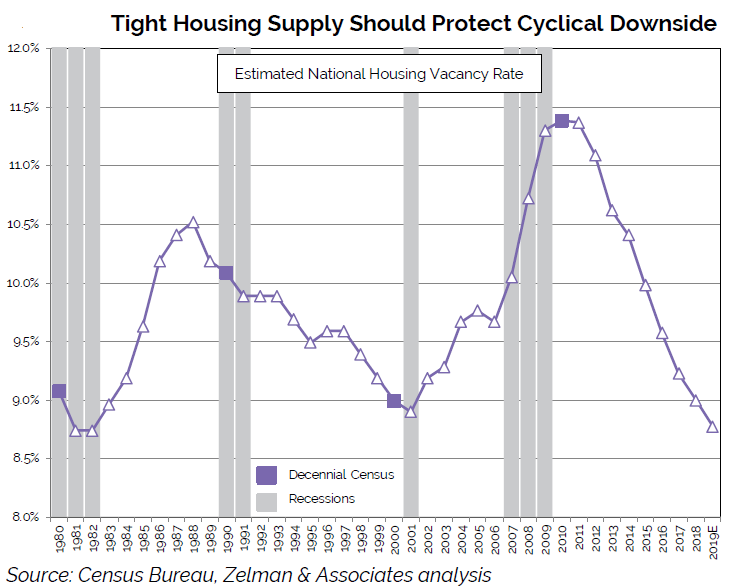 We think this is the blinding linchpin that the Fed and those under its spell can’t see. Consider this missing link:

Post WWII history shows that residential housing investment and activity make up ~5% of U.S. Gross Domestic Product. Its contribution all but disappeared through 2008/2009 and after a decade of expansion has only returned to 3.8%. The 3.8% number would have been a nightmare number over the last sixty years and a number not seen since the lows of the Savings & Loan crisis in the late ‘80s and early ‘90s. This comes as we are in the early stages of 89 million Millennials putting on their household formation wizard hats and waving their magic wand. To think today’s housing powder keg will only drive this back to a historical norm would be asking a lot of probability analysis.

A broadening of economic growth is something no one is expecting today. It’s something we haven’t seen in more than a decade. Only wizards can remember that far back! The rich cities and narrow set of winning companies have indeed gotten richer from historically low interest rates and the market has ceded its psyche to the wizards that run the Fed and the most popular tech growth companies. The Fed is backward looking (just the opposite of wizardry) and the market’s reliance on it is not fundamental (under a spell). Underlying economics paint an incredibly strong and resilient picture, but in a broader way than currently believed. We will stay focused on growing capital over time and remain wary of the market’s purpose and its occasional euphoria episodes tied to wizards and spells.
Warm Regards,

We believe one of the hardest things to do in common stock investing is to hold winners for a long time. This is especially true with what are normally cyclical industries. In our...