My generation, millennials (those born from 1980 to 2000), have been noted for much of the last 10 years to be a risk averse group. As an example, I ran across a 2014 clip from The Wall Street Journal titled, “Chart of the Day: Millennials Are Really Risk Averse.” The article used research from the Brookings Institution to explain how millennials were parking a much larger portion of their savings in cash (52%) versus all other age groups at (23%). While this was true then, we can’t say that today. John Maynard Keynes’s Animal spirits have arrived among my peers in a powerful way.

Anecdotally, myself and our team at Smead Capital Management have run into countless situations over the last six months that verify this. It leaves investors like us with an audacious feeling from what we just witnessed. The most recent example was a conversation with a person at my daughter’s little league game. He asked me what I did for a living, I mentioned that my company works with stock market investors and that we manage mutual funds. Immediately, he began to tell me that he rolled money over to an IRA at an online brokerage firm last spring and bought a very speculative stock. As though this wasn’t enough, he also told me that he made a sum of $30,000 from this. Here’s how we know the animal spirits are present. I never asked him for what he’s done in his investing and how much he made. He felt compelled to tell me this all on his own. Again, animal spirits.

This anecdotal experience is manifesting itself across the USA. Below is a chart that we got from Cypress Capital that shows equities as a percentage of total financial assets since 1952. 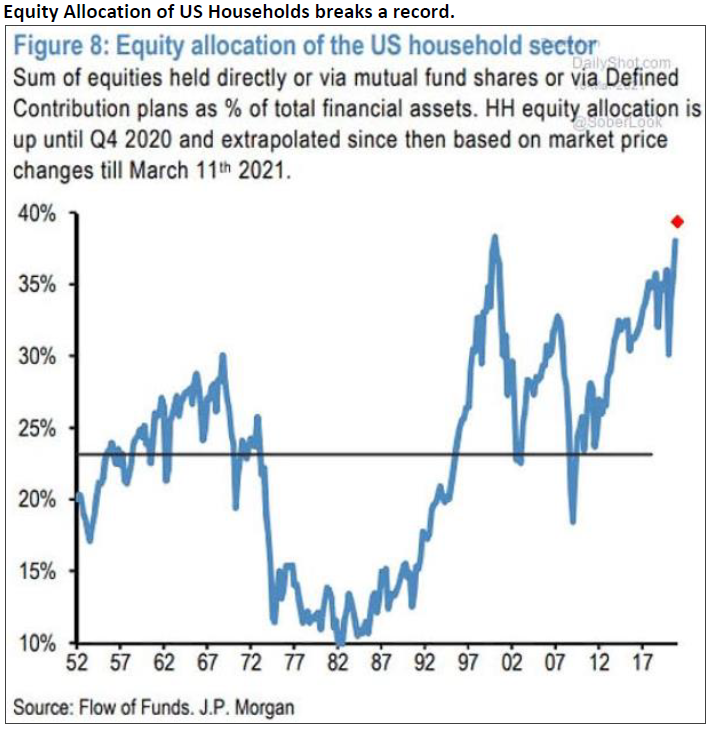 We are at the highest level of equity ownership among US households! The last time we were at/near this level was 1999. The only other period that produced an elevated peak was 1969. In our vernacular, these two other eras led to 10 years of stock market failure.

The anecdotal evidence matches up with what is going on among stock market investors at large. Further, the former risk aversion morphed into reddit risk taking, as millennials became a generation of investors who believe the stock market is a way to create wealth. While this is a good thing (only in the long run), it is more likely to damage them over the next 10 years. They didn’t start out with this view back in 2009. No, they are joining the party in the wee hours.

To understand what stock market failure could be for these Johnny-come-lately millennials, let’s look at what happened in the stock market since 1999. From the end of 1999 to the end of 2009, the S&P 500 lost roughly 1% annualized, including dividends reinvested. A taxable investor did worse than this. The chart of equities as a percentage of total financials assets is a contrary indicator of forward 10-year returns. At ownership levels like today, forward returns are zero to negative. At ownership levels like we had in the mid-to-late 1970’s and 1980’s, you could earn double-digit returns being broadly diversified in the S&P 500.

What this all points to is that market risk looks terrible. In comparison, investment risk looks incredible. Below is a picture of the energy sector’s performance during the last stock market failure that began in 1999.

There was no stock market failure for energy investors during that period. It was a time to build wealth in an era that most others didn’t. Oil was at major low point as investors were crazy about stocks in the late 1990’s. To say that oil was at a low in the spring of 2020 would be an understatement. We believe our ownership in Continental Resources (CLR), ConocoPhillips (COP) and Chevron (CVX) will overcome stock market failure in an oddly similar way.

The animal spirits we see today in our daily lives and in the data are Peter Lynch’s “Cocktail Theory” explained in his book One Up on Wall Street. As Lynch explained of his experience at cocktail parties, “In the first stage of an upward market – one that has been down awhile and that nobody expects to rise again – people aren’t talking about stocks. In fact, if they lumber up to ask me what I do for a living, and I answer, ‛I manage an equity mutual fund,’ they nod politely and wander away.” He says that in the final stage: “…they’re crowded around me – but this time it’s to tell me what stocks I should buy. Even the dentist has three or four tips, and in the next few days I look up his recommendation in the newspaper and they’ve all gone up.” We agree with Lynch on what animal spirits are like at the end. At best, we believe the S&P 500 Index will make zero return, including dividends reinvested, over the next 10 years. Today’s circumstances are extremely difficult for growth stock investors, like Lynch’s firm Fidelity is known for, because few great growth businesses are reasonably priced. However, to Lynch’s credit, he was out advocating for oil stocks a little over a year ago in Barron’s. Why? He knew animal spirits were high and he wanted to take investment risk to build wealth.