Buffett on Aesop and Cinderella

In the annual letter to Berkshire Hathaway shareholders in early 2000, Warren Buffett attempted to remind everyone why value investing works, despite the financial euphoria all around him at that time. We will revisit this valuable lesson and draw implications for reviving enthusiasm for value investing at a point eerily similar to early 2000. The fast growing spread between growth and value in the last 30 days looks to us very much like the first 67 days of 2000 and the entire year of 1999. 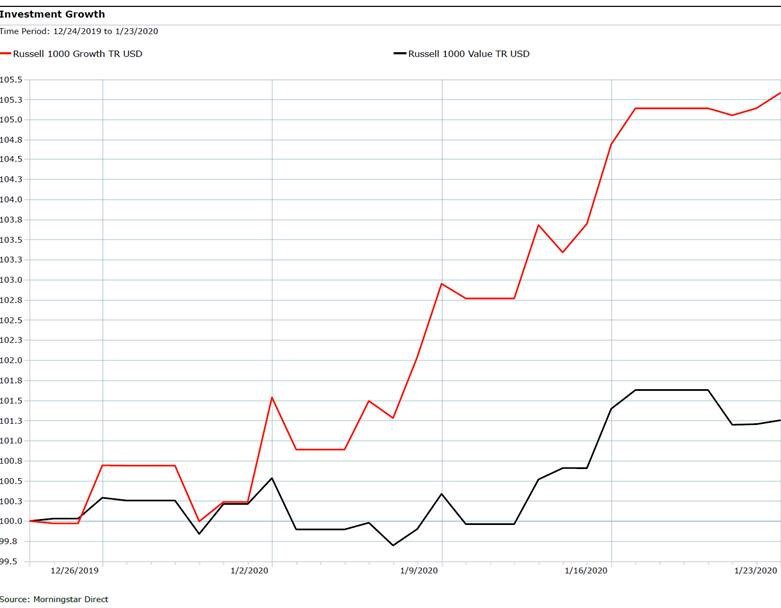 In his letter, Buffett stated:

“The oracle was Aesop and his enduring, though somewhat incomplete, investment insight was “a bird in the hand is worth two in the bush.” To flesh out this principle, you must answer only three questions. How certain are you that there are indeed birds in the bush? When will they emerge and how many will there be? What is the risk-free interest rate (which we consider to be the yield on long-term U.S. bonds)?”

Value investing is the “bird in the hand”. Buying businesses with assets, earnings and free cash flow in hand, which the stock market is afraid of for one reason or another, has significantly outperformed both the market and growth strategies over long periods of time. This has been true regardless of using price-to-book value or price-to-earnings and is regardless of the academic study used to prove it. Buffett continued:

“Aesop’s investment axiom, thus expanded and converted into dollars, is immutable. It applies to outlays for farms, oil royalties, bonds, stocks, lottery tickets, and manufacturing plants. And neither the advent of the steam engine, the harnessing of electricity nor the creation of the automobile changed the formula one iota — nor will the Internet.”

Buffett was saying that, “It is not different this time!” In every cycle a certain arrogance surrounds the most exciting growth and technology businesses. In 1929, it was RCA and the advent of the radio business. In the early 1970s, it was the Nifty Fifty, in 1980-1981 it was the oil business and today it is the FAANG/growth stocks.

Market commentators and investment managers who glibly refer to “growth” and “value” styles as contrasting approaches to investment are displaying their ignorance, not their sophistication. Growth is simply a component, usually a plus, sometimes a minus in the value equation. Alas, though Aesop’s proposition and the third variable that is, interest rates are simple, plugging in numbers for the other two variables is a difficult task. Using precise numbers is, in fact, foolish; working with a range of possibilities is the better approach. Usually, the range must be so wide that no useful conclusion can be reached. Occasionally, though, even very conservative estimates about the future emergence of birds reveal that the price quoted is startlingly low in relation to value. (Let’s call this phenomenon the IBT Inefficient Bush Theory.)

We like to buy meritorious companies at bargain prices when the range of “birds in the bush” are offered on very attractive terms. We expect to be right about 60% of the time and extremely right about 20% of the time. The math of common stock investing works in our favor. H&R Block’s share price failed us years ago when their moat got damaged. We lost some money we had made in the prior years. However, the worst you can do on a stock is lose 100% of the investment, but the best you can do is unlimited. This is where our 20% of the best picks come into play, as well as our approach of riding winners to a fault.

To be sure, an investor needs some general understanding of business economics as well as the ability to think independently to reach a well-founded positive conclusion. But the investor does not need brilliance nor blinding insights. At the other extreme, there are many times when the most brilliant of investors can’t muster a conviction about the birds to emerge, not even when a very broad range of estimates is employed. This kind of uncertainty frequently occurs when new businesses and rapidly changing industries are under examination. In cases of this sort, any capital commitment must be labeled speculative.

Buffett always says that an IQ over 125 doesn’t do much for an investor. We are glad we qualify quite well under his theory.

Buffett on “Circle of Competency”

Now, speculation — in which the focus is not on what an asset will produce but rather on what the next fellow will pay for it — is neither illegal, immoral nor un-American. But it is not a game in which Charlie and I wish to play. We bring nothing to the party, so why should we expect to take anything home? The line separating investment and speculation, which is never bright and clear, becomes blurred still further when most market participants have recently enjoyed triumphs. Nothing sedates rationality like large doses of effortless money.

Momentum and growth investing were so successful in the last five years that it qualified as effortless. The triumphs are thick and huge and startling in magnitude. The market is well sedated. Info tech, when added with Amazon (AMZN), Alphabet (GOOGL) and Facebook (FB), is approaching 40% of the S&P 500 index, similar to the end of 1999.

Buffett on Outcomes from Financial Euphoria

After a heady experience of that kind, normally sensible people drift into behavior akin to that of Cinderella at the ball. They know that overstaying the festivities that is, continuing to speculate in companies that have gigantic valuations relative to the cash they are likely to generate in the future will eventually bring on pumpkins and mice. But they nevertheless hate to miss a single minute of what is one helluva party. Therefore, the giddy participants all plan to leave just seconds before midnight. There’s a problem, though: They are dancing in a room in which the clocks have no hands.

The chart below shows how terrible an investor in the S&P 500 Index did from the end of the tech bubble to ten years later: 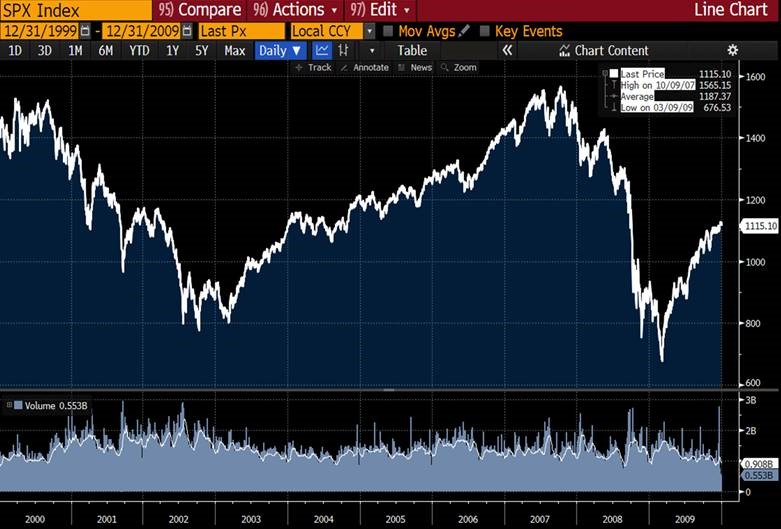 Buffett on the 1999 Euphoria

This surreal scene was accompanied by much loose talk about “value creation.” We readily acknowledge that there has been a huge amount of true value created in the past decade by new or young businesses, and that there is much more to come. But value is destroyed, not created, by any business that loses money over its lifetime, no matter how high its interim valuation may get. What actually occurs in these cases is wealth transfer, often on a massive scale. By shamelessly merchandising birdless bushes, promoters have in recent years moved billions of dollars from the pockets of the public to their own purses (and to those of their friends and associates). The fact is that a bubble market has allowed the creation of bubble companies, entities designed more with an eye to making money off investors rather than for them. Too often, an IPO, not profits, was the primary goal of a company’s promoters. At bottom, the “business model” for these companies has been the old-fashioned chain letter, for which many fee-hungry investment bankers acted as eager postmen. But a pin lies in wait for every bubble. And when the two eventually meet, a new wave of investors learns some very old lessons.

The nice thing about the stock market is that it usually does whatever will frustrate the most investors. Buffett would say that Cinderella thought she was in good shape to enjoy the last hour and today’s investors in extremely popular securities want to get the remaining benefit out of the growth/tech/momentum trends. Here is how much index investors benefitted by catching the 18 months prior to Buffett’s letter and stayed for 11.5 years: 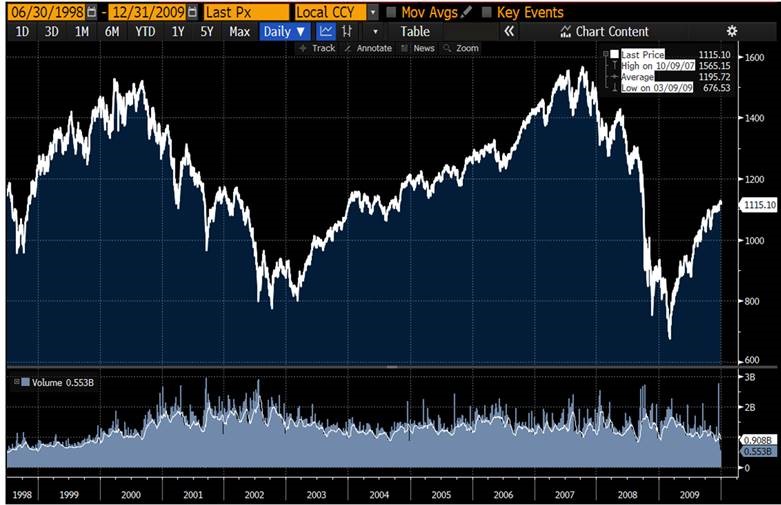 If you had made the incredible last 50% gain of the S&P 500 Index by entering mid-year 1998, you would have broken even over those years plus received dividends. In other words, it all “turned to pumpkins and mice!” For many, that last 18 months of gains sucked them into the market at just the wrong time.

In conclusion, we will continue to seek value under Aesop’s construct and avoid financial euphoria in popular securities to prevent speculation. Secondly, we fully expect that the momentum of growth/tech stocks will be the most spectacular near the end. Could the recent stage be the beginning?