Dow Changes as a Contrary Indicator

The folks who select the companies in the Dow Jones Industrial Average (DJIA) came out with their latest changes on Monday, September 9, 2013. They removed Bank of America (BAC), Hewlett Packard (HPQ) and Alcoa (AA) from the DJIA. Added to the index were Visa (V), Nike (NKE) and Goldman Sachs (GS). At Smead Capital Management, we are always looking for important psychological clues to human behavior as it pertains to the popularity of common stocks.

In this missive, we will demonstrate the psychology surrounding stock market popularity from a sector, industry and individual company basis, and use changes made in the DJIA over the last 16 years as a textbook. Secondly, we will show how important just a few decisions can be in the successful execution of a concentrated portfolio of well-selected common stocks.

The DJIA and the S&P 500 indexes practice very low turnover, but are actively managed portfolios. One study we use shows the S&P 500 index has average of 4.52% turnover over the last 20 years. The DJIA appears to have a 2-4% long-term turnover level despite last year’s 6% turnover in the trade of Kraft (KRFT) for United Healthcare (UNH). Here are the changes in the DJIA since 1997:

Source: Dogs of the Dow

As you are probably aware, we like to buy meritorious companies which are deeply out of favor for one reason or another and we will sell shares of a poor performing security if it breaks any of our eight criteria. The changes in the DJIA show which companies in their portfolio have share prices which became depressed and/or the underlying business are in decline.

Low share prices create a low weighting in the index since it is price weighted. Therefore, many times it is not that the company has poor future prospects; it’s that their prospects come from too low a base. Additions have had a tendency to be large and recently successful companies with the glow of stock market popularity.

Let’s focus first on the changes to the DJIA in 1997 and 1999. Technology/telecom and large cap growth stocks were all the rage from a sector standpoint, while energy, basic material and industrial stocks were in the doghouse. Of the eight deletions, five were in the doghouse category. Seven of the eight additions were in large-cap growth and tech/telecom. Therefore, those who manage the relatively inactive portfolio called the DJIA sold that which was unpopular to buy that which was popular.

To get at the heart of our contrarian view, we will drill down on what we believe are the two most egregious sins of omission and commission perpetrated by the DJIA portfolio managers. They sold Texaco in 1997 and Chevron in 1999 as oil prices were approaching a thirty-year low around $11 per barrel. They traded them for two tech stocks, Hewlett Packard and Microsoft. Hewlett had dramatically outperformed the US stock market from 1990-1997 and Microsoft had been one of the best performing large-cap stocks on the planet from its IPO in 1986 to the point at which it was added to the index. In 1999, Microsoft was probably the most popular stock which ever traded until Apple (AAPL) caught fire over the last ten years. As the manager of a concentrated portfolio, you must resist the temptation to purchase popular securities.

The keepers of the DJIA have made numerous moves toward popularity in the last 16 years. Pfizer was popular drug stock in the aftermath of Viagra in 2004, while Kodak was a declining business headed for bankruptcy. Financials were popular in 2004 when they traded an out-of-favor paper manufacturing company (International Paper symbol IP) for American International Group (AIG). Chevron was added back to the index within 5 months of the all-time high in oil prices in exchange for Honeywell (H) in 2008. The index bailed out on AIG within six months of the bottom of the financial meltdown in 2008. Here is how the Washington Post describes the current changes:

The announcement of the changes shows the absurdity of the index. “The index changes were prompted by the low stock price of the three companies slated for removal and the Index Committee’s desire to diversify the sector and industry group representation of the Index,” the company said.

Changes like these didn’t ruin the return of the DJIA because it is the benchmark. It does, however, give us great encouragement to those who seek good quality shares at depressed prices, hold them for a long time like the indexes and do it with an eye on quality, like the DJIA. Warren Buffett says:

I could improve your ultimate financial welfare by giving you a ticket with only twenty slots in it so that you had twenty punches – representing all the investments that you got to make in a lifetime. And once you’d punched through the card, you couldn’t make any more investments at all. Under those rules, you’d really think carefully about what you did, and you’d be forced to load up on what you’d really thought about. So you’d do so much better.

Trading out of major oils in 1997 and 1999 to chase popular tech stocks was a very poor punch of the DJIA handler’s card. 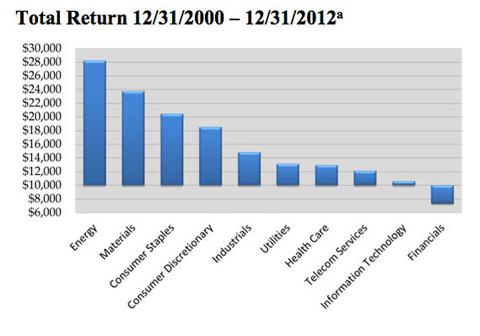 It is no surprise that two of the worst performing sectors of the last 12 years produced two very poor performing stocks in the index. The two worst performing groups in the prior twelve years were financials and information technology. The DJIA is pulling one of the largest financial firms on the planet (BAC) and a major technology company (HPQ) after years of miserable stock market performance. Sector wise, they are staying with financials through GS and V and adding to the sector, to their credit. However, one of the financials, Visa, might be the most popular financial stock on the planet, in our opinion. The addition of Nike (NKE), one of the most popular brand names and internationally powerful companies in the world, further highlights the absurd popularity-chasing nature of the DJIA. We think back to Buffett again, who observed that “Most people get interested in stocks when everyone else is. The time to get interested is when no one else is. You can’t buy what is popular and do well.”

Will history repeat itself and reduce the success of this actively managed index? We don’t have an answer, but we are encouraged by what the DJIA teaches us about practicing concentrated portfolio management with low turnover.