The investors of Smead Capital Management have been hearing us talk about ‘First World Problems’ recently. These are undoubtedly problems, but (in a manner of progress) are vastly different problems than we had before. Therefore, we feel we’ve solved the problems of the past and have opened ourselves up to new problems. This is like moving forward from pre-algebra to algebra in math. Our parents would be proud.

The well-known billionaire hedge fund manager and author Ray Dalio succinctly communicated our prior problem of capitalism when he wrote in 2019:

Over these many years I have also seen capitalism evolve in a way that it is not working well for the majority of Americans because it’s producing self-reinforcing spirals up for the haves and down for the have-nots. This is creating widening income/wealth/opportunity gaps that pose existential threats to the United States because these gaps are bringing about damaging domestic and international conflicts and weakening America’s condition.

The inequality of wealth has reached epic proportions over the last couple of years. We witnessed economists and central bankers become unabashed ZIRP (zero interest rates policy) believers, in a way that would make the Bank of Japan from the early 1990’s blush. To Dalio’s point, this looked like a Gilded Age in the accrual of wealth to the top. However, what makes this different is that Jay Gould and Cornelius Vanderbilt didn’t tell everyone how the system was wrong then. The low interest rates of the 19th century faded and the wealth of the gilded families and royals was quite different by the end of World War I. If you need a good example, read Helen Rappaport’s book After the Romanovs to learn what blue bloods did to make money after they escaped Russia (or listen to our podcast episode with her here).

Can we see the same wheels of change fixing the problem that Dalio laid out? Yes, because first, interest rates are rising. All assets are worth less with higher risk-free rates. This is prima facie. In a practical way, not all assets will be treated the same. Below is a breakout of assets by income percentile in the 4th quarter of 2021. 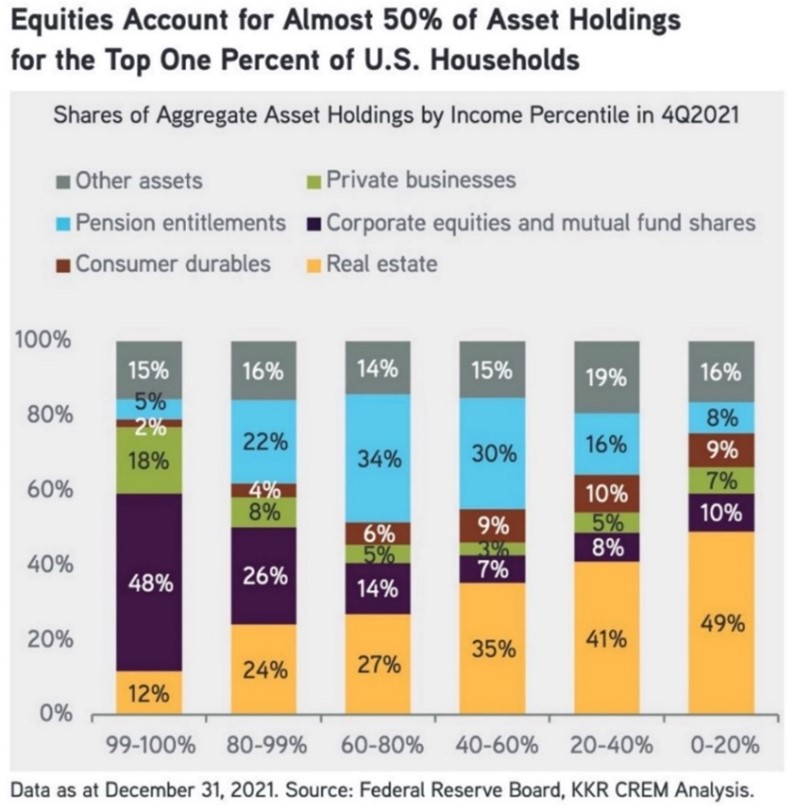 As readers can see, the highest income percentile is the largest owner of corporate equities and mutual fund shares, which we will refer to as stocks. Their second largest holding is private businesses. While we can’t mark to market the private business, we can look at the stock market as a proxy for both of these because the risk-free rate hurts both in similar ways. 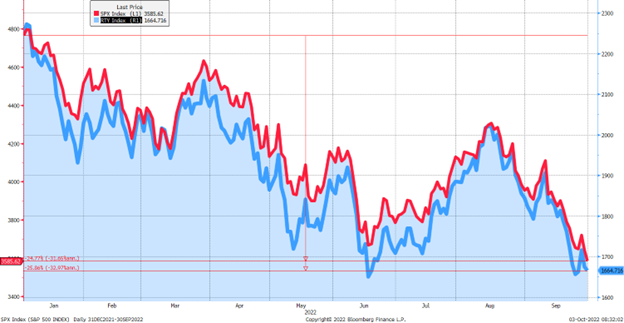 Without needing to guess how much money has been lost in bonds, nominally speaking, we can see we are solving Dalio’s wealth inequality problem. The wealthier are getting poorer at a more rapid rate than anyone else because their largest asset is getting hurt. You will find no one saying “good job” for solving this problem, not even Dalio. You will not find Elizabeth Warren saying that we are now seeing a growing middle class, though we are. People from the top are mean reverting to the middle slowly, but surely.

What we are witnessing is the power of capitalism to correct imbalances all on its own, when the free market is allowed to operate. We do not believe that ultra-low interest rates were the free market, but that can be saved for another discussion.

The famed economic historian Neil Ferguson struck a chord on this discussion in his piece titled, “‘Trevents’ Predict Economic, Political Futures”. He points out that media doesn’t present things in the way we should think about them.

“Journalism by its very nature hides progress,” Pinker argued in a recent interview, “because it presents sudden events rather than gradual trends … the press is an availability machine. It includes the worst things to happen on Earth at any given time.” But, he adds, “human progress is an empirical fact.”

He goes on further to even mock the economists that predicted dour outcomes over 60 years ago for the problems afoot at that time.

For decades, since its 1961 edition, students of economics had read in Paul Samuelson’s textbook the following sentence: “The Soviet economy is proof that, contrary to what many skeptics had earlier believed, a socialist command economy can function and even thrive” — a sentence that still appeared in the 1989 edition. Samuelson’s hugely influential book also featured a chart projecting that the gross national product of the Soviet Union would exceed that of the US at some point between 1984 and 1997. The 1967 edition suggested that the great overtaking could happen as early as 1977. By the 1980 edition, the time frame had been moved forward to 2002–12. (The graph was quietly dropped after the 1980 edition.)

The Soviets don’t rule the world today. Wealthier people are getting poorer and their income is seeing the biggest drag. What other problems have we solved in the recent past?

Lastly, let’s look at the list of what seems unsolvable now:

In summary, this list is a series of problems. Hark back to your Sunday School or Synagogue teaching as Genesis 1:28 says, “And God blessed them. And God said to them, “Be fruitful and multiply and fill the earth and subdue it…” Solving these problems is how we subdue the earth. Pinker is right that the way things are explained in the media masks the gradual trend or success that capitalism is providing as it seeks to correct imbalances created in the past. As the developed world comes off the highest net worth we’ve ever seen, we are blessed. Let’s see which of these First World Problems will be rectified by being fruitful, multiplying and subduing the earth.