As rates fall to zero in most of the world, the line that has been ringing in our mind is “You can check out any time you like, but you can never leave!” This is a chorus investors have sung through their capital allocations. We believe the Eagles provided an excellent understanding of what today’s market is giving investors in their song, Hotel California.

On a dark desert highway, cool wind in my hair
Warm smell of colitas, rising up through the air
Up ahead in the distance, I saw a shimmering light
My head grew heavy and my sight grew dim
I had to stop for the night1


Right now, there is a “warm smell” of speculation in defensive stocks and outright speculative arenas of the market. The two charts below show this. On the left is a chart showing the price move recently of cyclicals versus defensives. The chart on the right shows the number of money-losing firms in the Russell 3000. Investors should note that the prior episodes with a high number of loss-making companies was during recessionary pullbacks in 2001-2003 and 2008-2009. 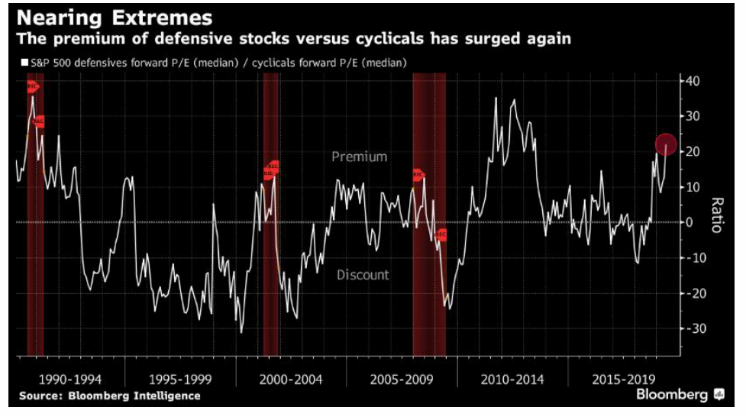 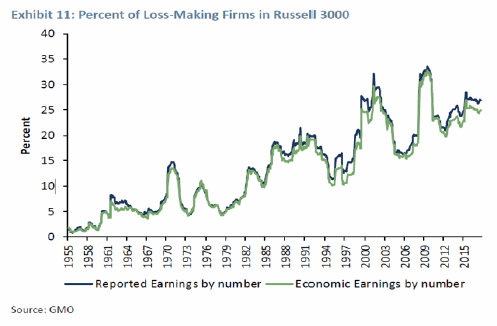 The “shimmering light” of today is millennials. In this economy, which people love to hate, the chart below shows what the balance sheet, income and debt service ratio of 27-to-35-year-old Americans has looked like since the early 1990’s. 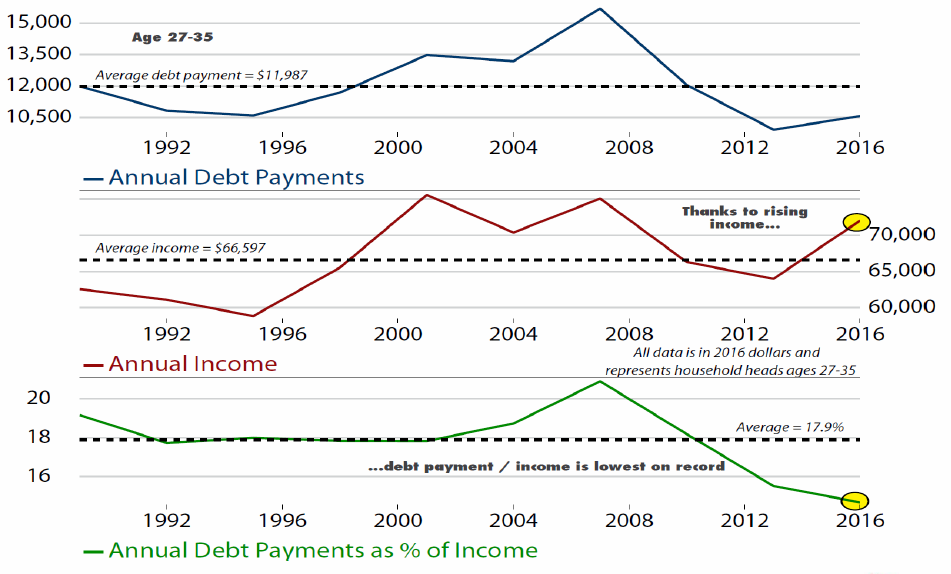 Her mind is Tiffany-twisted, she got the Mercedes bends
She got a lot of pretty, pretty boys, that she calls friends
How they dance in the courtyard, sweet summer sweat
Some dance to remember, some dance to forget

Investors today are playing musical chairs with their investments. To us, they look “Tiffany-twisted.” They are waiting to grab a chair, but they are just “dancing to forget.” Jim Grant said in Barron’s in June, “Humans eat, sleep and extrapolate. What we think is often nothing more than what we have recently.” We believe the Businessweek curse, much like “The Death of Equities” in 1979, was brought back in April of 2019 on the cover below. We are “dancing to remember” the ugly effects that inflation has had on all of asset allocation, not just public equities. Institutional participation in alternatives may find no immunity to the damage of inflation! 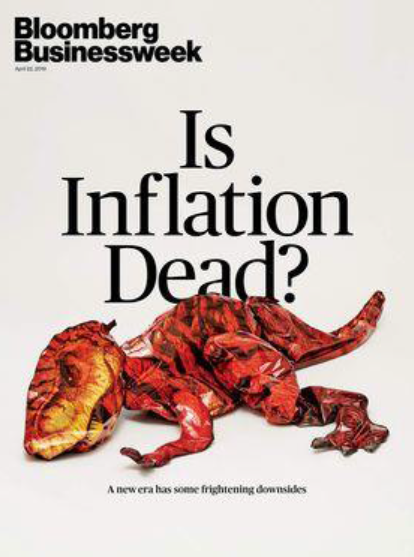 So I called up the Captain,
‘Please bring me my wine’
He said, ‘we haven’t had that spirit here since nineteen sixty-nine’
And still those voices are calling from far away,
Wake you up in the middle of the night
Just to hear them say

The spirit we have today looks to us exactly like 1969 or 1999 in consumer confidence and U.S. household ownership of common stocks as noted in the charts below. Both of these junctures provided little investment merit for index-oriented investors. We think our concentration could be a keen benefit in the era ahead. In this rare case, confidence is not our friend. 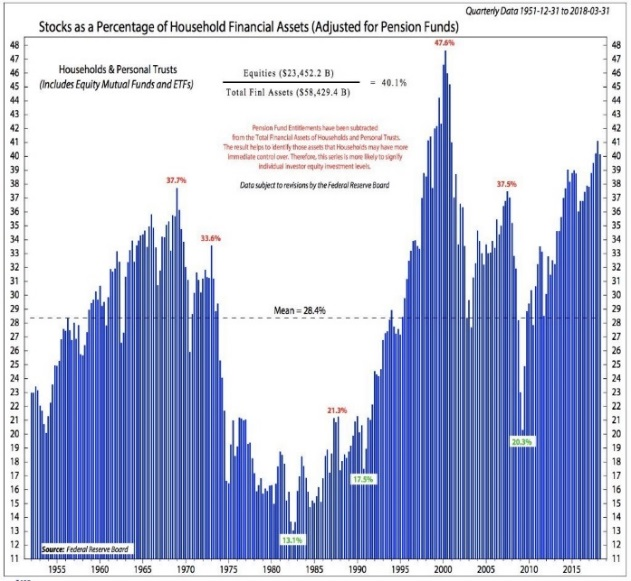 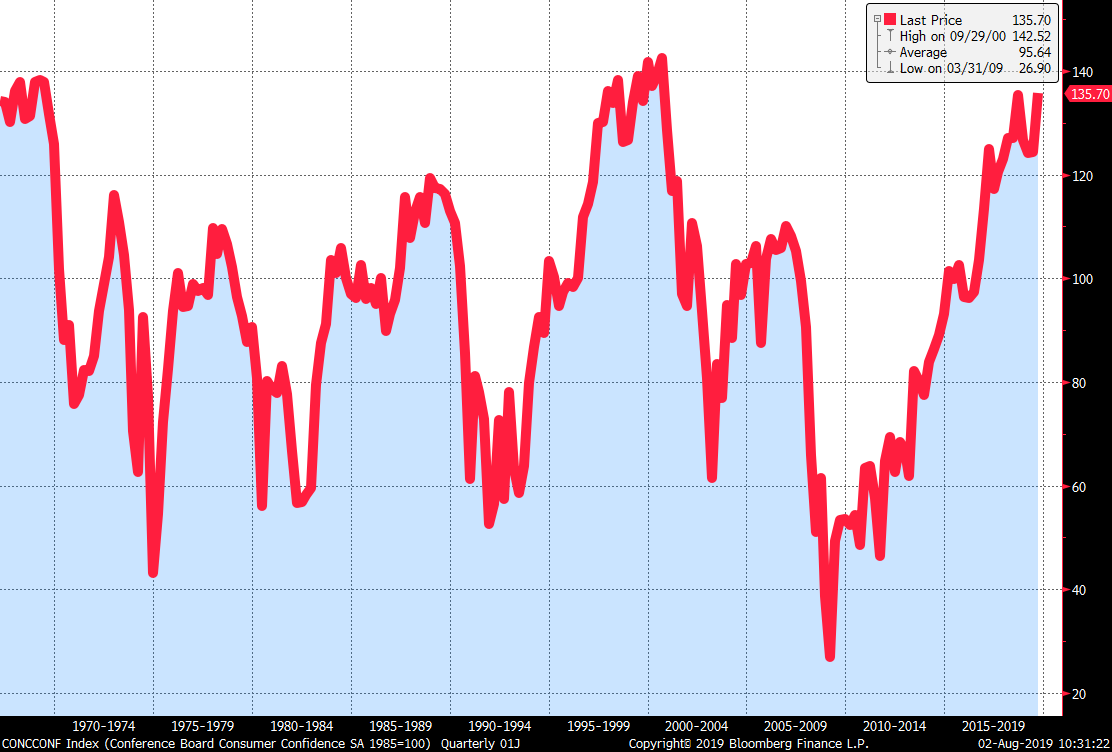 The chart below provides insight and also explores risks today. It is the net debt-to-EBITDA of the U.S., U.S. ex-tech, Japan and Europe, since 1995. The conclusion we come to from this, much like the folks at GMO have argued, is this outperformance of the U.S. relative to the rest of the world has come on the back of borrowing. In turn, these borrowings have been used to buy back stock. Europe and Japan haven’t levered like the U.S. has in the last 5 years. The only other time that the U.S. companies had this high of leverage relative to cash flow was 2001-2003 and 2008-2009. These are the same dates as the speculation highs of earlier that we noted. Investors will say that U.S. companies were right to do this because of the low cost of money. “Bring your alibis!” While this has been exhibited in returns to now, it shows an outsized level of risk that is being taken by U.S. executives, who on average will be just that: AVERAGE. 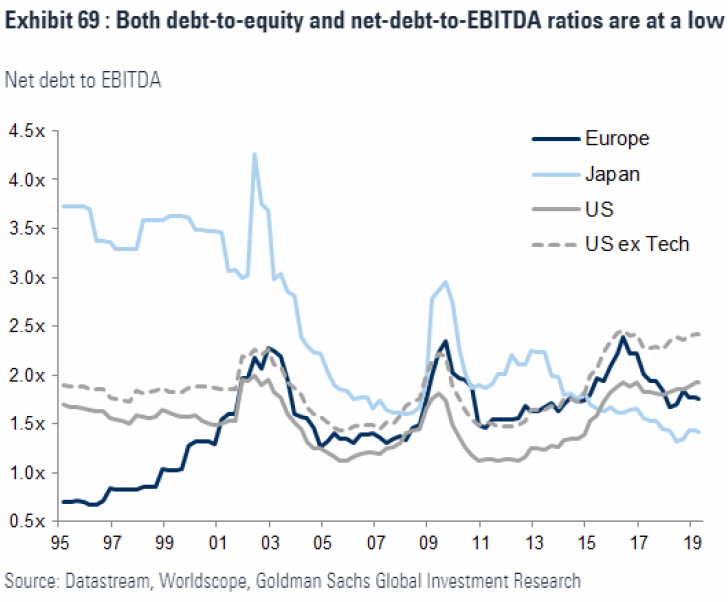 Mirrors on the ceiling,
The pink champagne on ice
And she said, ‘we are all just prisoners here, of our own device’
And in the master’s chambers,
They gathered for the feast
They stab it with their steely knives,
But they just can’t kill the beast

Americans households still haven’t levered in this era. We are bumbling along at the lowest levels of household debt service ratios since 1980. Corporations have used leverage, while households have not. Corporations are tracking at all-time highs in the stock market and private markets. Meanwhile, no one is bragging about the economy! Until households, and ultimately millennials, borrow to buy cars and homes, we believe the economy and interest rates are just prisoners of our own devices.

Last thing I remember, I was
Running for the door
I had to find the passage back to the place I was before

The “place I was before” for oil has been a larger part of the S&P 500 for most of the last 50 years. The chart below to the left shows that it has rarely been this low since 1990. The “place I was before” for valuation was that cheap stocks outperformed. As noted the lower chart to the right, this is the first time valuation has not mattered looking back to market cycles since 1984. 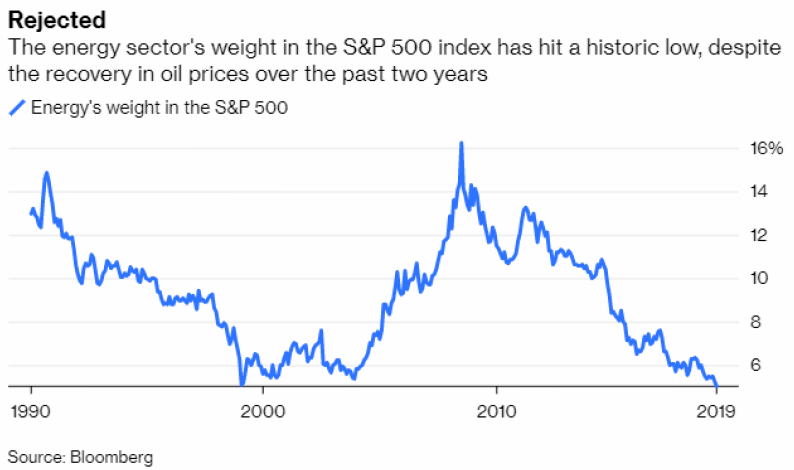 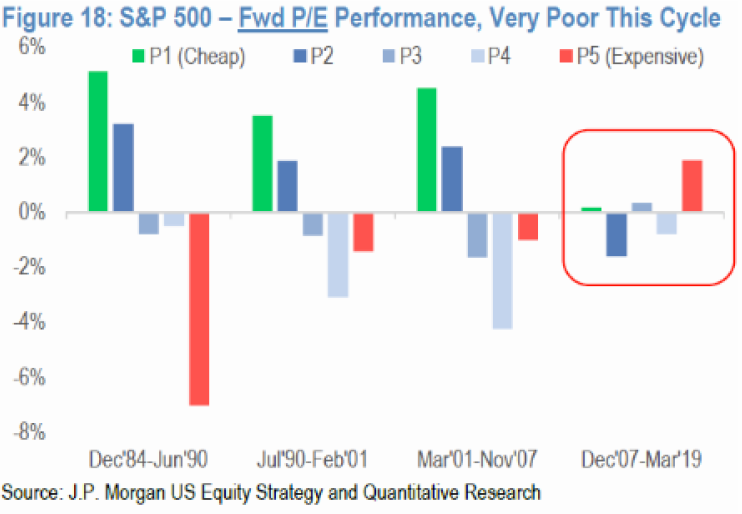 ‘Relax’ said the night man,
‘We are programmed to receive.
You can check out any time you like,
But you can never leave!’

We believe “the night man”, Federal Reserve Board Chairman Jay Powell, has told everyone to relax with his insurance cut and reassuring tone for keeping equity and fixed income markets calm. As the Eagles sang, “We are programmed to receive.” In his testimony to Congress he answered a question about the Phillips Curve by stating “The connection between the level of unemployment and inflation was very strong if you go back 50 years, and it’s gotten weaker and weaker and weaker to the point where it’s a faint heartbeat.” As the Fed began to get scared of this hated economy and decide to not raise rates earlier this year, investors and Wall Street applauded by sending stocks and bonds to higher prices today.

This stands in stark contrast to what Fed Chairman William McChesney Martin said in 1955. He stated to Wall Street bankers then:

In the field of monetary and credit policy, precautionary action to prevent inflationary excesses is bound to have some onerous effects–if it did not it would be ineffective and futile. Those who have the task of making such policy don’t expect you to applaud. The Federal Reserve, as one writer put it, after the recent increase in the discount rate, is in the position of the chaperone who has ordered the punch bowl removed just when the party was really warming up.

We believe that Martin is right and the “Night Man” is wrong. It’s our opinion that the Federal Reserve will be mocked and ridiculed in the future for today’s actions. Wall Street has applauded and wants more rate cuts for one reason: it’s good for Wall Street. It keeps U.S. businesses borrowing at lower interest rate levels. It keeps the IPO market hot. It keeps asset values high across asset allocation for wealth management businesses. Our problem is that history would argue it could be bad for the clients. We don’t want to be good clients for Wall Street because “They livin’ it up at the Hotel California.” In contrast to the events of today and by making an effort to avoid these future risks, we believe our clients may find a “nice surprise” in the future.