Housing Goes from Graham to Munger

Ben Graham is ascribed as being the father of value investing. The intellectual framework he brought to investors was using the available accounting to measure value of a business. His way of measuring was book value, the total assets minus all liabilities. By figuring out this number, he could then divide this metric by the total shares outstanding to understand how much book value per share (what some may call net worth) a company had versus what the price the shares were trading for in the stock market.

This is where we get the famous axiom, “Price is what you pay. Value is what you get.” Graham specifically preferred book value that was predominantly cash or marketable securities. Liquid assets made the book value easier to understand. In this lens, an investor would have little regard for the amount of income that a business can generate over time as he primarily focused on the balance sheet.

Warren Buffett was hugely influenced by his teacher’s concepts early in his career. In later years, after being introduced to Charlie Munger and witnessing what they saw with their investment in See’s Candy, he began to think much more about the future of a business than the current balance sheet.

Charlie Munger is widely quoted for saying: “Over the long term, it’s hard for a stock to earn a much better return than the business which underlies it earns. If the business earns 6% on capital over 40 years and you hold it for that 40 years, you’re not going to make much different than a 6% return—even if you originally buy it at a huge discount. Conversely, if a business earns 18% on capital over 20 or 30 years, even if you pay an expensive looking price, you’ll end up with a fine result.” What Munger is pointing to is not the current book value, but instead how the book value could grow. Return on equity (ROE) is nothing more than book value growth.

Munger’s principle is true no matter how you run the numbers. A company running 18% ROE doubles their book value every four years. A company running 6% doubles book value every twelve years. This would lead an investor to pay a multiple relative to the amount of time needed to grow book value. If we are talking about twelve years, you’d pay three times as much for the current book value of the investment doubling book in four years, though this is not perfect as you can’t know the future of either investment.

Below is a visual way of thinking about all of this. As we look across the developed world, you can see those investments which produce 10% ROE roughly trade at book value. Companies that produce less trade at a discount to book value. As you move toward higher double-digit ROE (15% or greater), you can see that investors are willing to pay book multiples that are less linear. In turn, most investors focus more on the earnings multiple of those businesses. Why? Because high ROE means the underlying book value (net worth) today is small relative to what the book value will be in the future because it is compounding quicker. 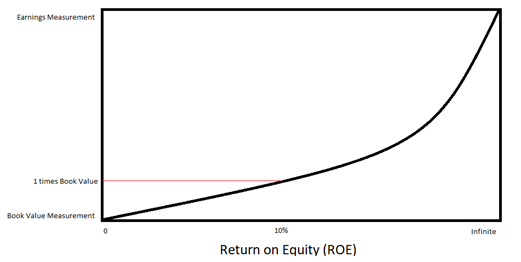 One other thing to mention is that investors often pay lower book multiples for heavily-indebted businesses. Leverage works against you if things go bad. The liability holders have a greater claim against the company’s assets if things go awry. The total net worth (book value) is more important in these situations, so price relative to book value becomes a bigger fixation for equity investors.

This brings us to a current debate going on in the housing industry. Over the weekend, Barron’s provided us excellent human fodder for this discussion by publishing an article titled “Home-Builder Stocks Got Slammed—and There Are More Challenges Ahead.” The opening states “Home may be where the heart is, but no one should fall in love with home-builder stocks right now.” You could tell immediately it was flowing with optimism. In it they discussed high frequency numbers (pending homes sales) that bounce around month to month and then other macro-economic topics like interest rates rising. After this tomfoolery, the article quoted Wall Street analysts on valuations. One of them notes that the home builders are trading at just seven times 2023 earnings. Another analyst said this isn’t a good way of looking at them because they have traditionally traded off of price-to-book ratios.

This same analyst downgraded Lennar (LEN) because it trades at 1.3 times book value. Let’s look at the history of the relationship between the debt of Lennar and the assets. Below is a chart that shows the percentage of Lennar’s debt relative to its assets. 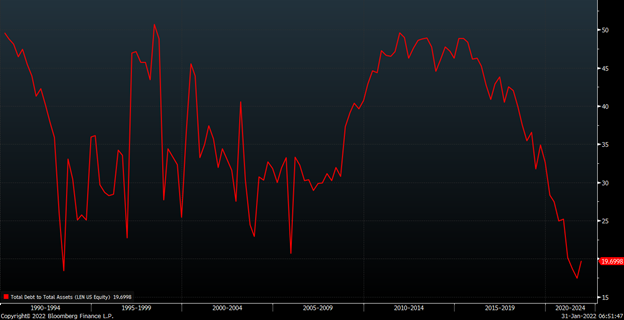 As you can see, Lennar is bumping along the smallest percentage of debt relative to its assets in its corporate history. Liability owners don’t claim anywhere near the value of the business they use to. The next chart below shows the company’s return on equity going back to 1991. 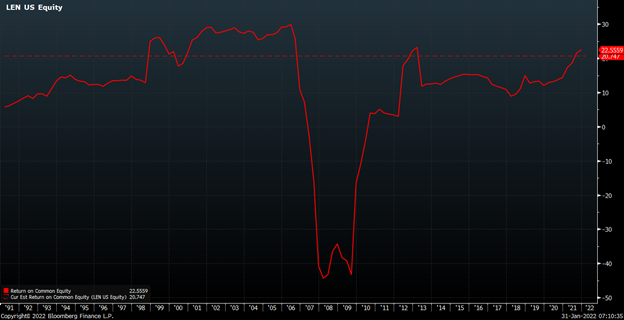 The average ROE has been 20% over the entire history, but we believe this is biased as the early 2000’s was a very different, unsustainable era. For starters, we were going to go into a home buying depression because Gen Xers were a smaller consumption group by sheer numbers compared to baby boomers. Second, homebuilders were primarily landowners/developers. Today, Lennar owns roughly 50% of the land they build on and the remainder they acquire via options. What’s the difference? The option you expense in your income statement, whereas the land would be carried as an asset and be offset by the debt needed to acquire it.

What does this leave you with? Very little book value for the option owner, but less capital trapped in the business. This causes higher ROE if income is held constant. Do we have proof? Yes. NVR only uses options. They have consistently traded at the highest price-to-book ratios in the industry. Again, it’s not about today’s balance sheet. It’s about how much the book value will grow via the earnings of the business.

This leaves us with a good framework to value these businesses. Below is a chart showing trailing price-to-earnings ratios going back to the early 1990’s. 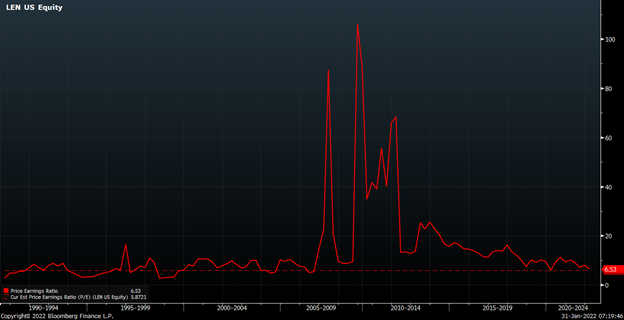 Stock market investors are paying the same P/E ratios as they did back when Lennar had far more debt, owned more land and produced lower return on equity than they do today. If Lennar even runs 20% average ROE over the next 10 years, the book value of their business would grow 6.19 times what it is today. If LEN trades for book value 10 years from today (the metric the analysts want to focus on today), it would cause an investor to compound their investment at 16.89%.

Our firm believes that housing has entering the Promised Land because the companies aren’t levered, don’t own land and have strong demand for their product over the next ten years. The Book of Numbers’ 13th chapter in the Old Testament explains exactly what we believe we are seeing in the housing industry today among the analysts (aka spies):

God had promised Abraham that there would be a Promised Land for the nations to come out of his son, Isaac. The land of Canaan that the spies were to explore was the same Promised Land. Moses asked for an assessment of the geographic features of the land, the strength and numbers of the population, the agricultural potential and actual performance of the land, civic organization (whether their cities were like camps or strongholds), and forestry conditions. He also asked them to be positive in their outlook and to return with samples of local produce.

When ten of the twelve spies showed little faith in the negative reports they gave about the land, they were slandering what they believed God had promised them. They did not believe that God could help them, and the people as a whole were persuaded that it was not possible to take the land. As a result, the entire nation was made to wander in the desert for 40 years, until almost the entire generation of men had died. Joshua and Caleb were the two spies who brought back a good report and believed that God would help them succeed. They were the only men from their generation permitted to go into the Promised Land after the time of wandering.

We advise investors to not be the ten spies when the land of milk and honey could be ahead in housing and the companies are growing book value by the day!