To say that we were surprised by some of the discussion at the Berkshire Hathaway Annual Meeting would be an understatement. The conversation Warren Buffett and Charlie Munger leaned into on inflation was possibly the most interesting. Warren and Charlie gave large credit to Larry Summers for his willingness to stand alone on the effects of today’s fiscal and monetary policy on prices. We thought this was an ideal time review Buffett and Munger’s discussion and see what conclusions we could draw.

Warren Buffett answered a question on the signs of inflation by saying:

We’re seeing very substantial inflation. It’s very interesting. We’re raising prices. People are raising prices to us, and it’s being accepted. Take home building. We’ve got nine home builders in addition to our manufactured housing operation, which is the largest in the country. So we really do a lot of housing. The costs are just up, up, up. Steel costs, just every day they’re going up. And there hasn’t yet been because the wage stuff follows. The UAW writes a three-year contract, we got a three-year contract, but if you’re buying steel at General Motors or someplace, you’re paying more every day. So it’s an economy really, it’s red hot. And we weren’t expecting it.

Yeah. Warren, I think you touched on it, when we look at steel prices, timber prices, any petroleum input, fundamentally there’s pressure on those raw materials. I do think something you’ve touched on, Warren, and it goes really back to the raw materials. There’s a scarcity of product right now of certain raw materials. It’s impacting price and the ability to deliver the end product. But that scarcity factor is also real out there right now is as our businesses address that challenge.

In my economics classes at Whitman College, we were taught that money supply times velocity is equal to price times output (MV=PY). What has transpired in a large way since 2009 was an increase in the money supply (M). What has counteracted the increase of the money supply has been a decline in velocity during much of the last 10 years. We argued to investors in 2009 and 2010 that the increase in money supply back then was like doubling the money in the game of Monopoly, but not paying anymore for passing go or free parking. The game wasn’t going to speed up just because the bank had more money.

To think about it in today’s terms, we must start by stating that money supply is up 24% in the last year. If velocity stays equal to what it was prior, prices would be up by that amount. The data argues that velocity has declined further during the last year. We still believe the Monopoly analogy can teach us more.

The U.S. Federal Reserve has increased the money in the Monopoly bank. The federal government is handing out more than $200 for passing go and paying hundreds of dollars for free parking via loans, grants and stimulus checks. In the Monopoly context, they are willing to pay you money for just being the pawn on the board.

It is our opinion that Adam Smith’s invisible hand (aka the market) is beginning to understand this issue faster than the economists. Why, might you ask? Investors and business owners have more incentive than the academics at governmental or educational institutions. The economists may come back later and explain the whys. However, that won’t help you with inflation. The worst part of inflation is that you don’t know how bad it is until much later.

Where is the game of Monopoly speeding up? It’s notable in raw material as Greg Abel mentioned. Lumber, copper, steel and cotton are all at five-year highs. Warren commented on housing. Housing has tight supply, thus is exhibiting price inelasticity. If the inputs go up in price at our homebuilders (NVR, LEN and DHI) they are responding by raising the price of the house more than their costs.

The economy’s comeback has caught investors and economists on the wrong foot. As Buffett said, “This economy right now, 85% of it is running in super high gear, and you’re seeing some inflation and all of that, it’s responded in an incredible way.” If we were wrong about the response in the economy from 12 months ago to today, maybe we don’t know where we are heading?

We think housing is probably the most interesting look at the inflation question. It appears that we’ve had a tectonic shift in housing since the pandemic and policy response began. Millennials love houses and an act of God caused them to become the newest suburban immigrants. Baby boomers love houses and aren’t moving out of them like prior generations. Therefore, the existing supply of homes for sale is at a record low two-month supply. As an example, the chart to the right shows house prices among existing and new home build prices during the 1970’s.1 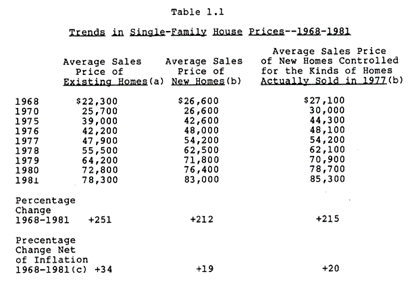 Investors are arguing that as real interest rates increase, housing will get hurt. The data of the 1970’s argues the opposite. As real interest rates increased, housing was protected from inflationary pressures and left extra compensation for the risks of that era beyond the effects of inflation. In other words, inflation showed you higher levels of pricing pressures in other inflationary times, though affordability was declining rapidly.

We have been discussing this amongst our investment team. We believe the cost of replacing an existing home is going up faster than the appraisal reports can keep up with. The cost of replacement only rises when inputs go up and finished homes are delayed by a lack of skilled labor.

How can this price reaction be so explosive in the short-term? Buffett and Abel commented on the material prices. The other item that must be noted is the lack of production capacity. We hear about chip shortages in the news as an example of this, but there is a myriad of products that you have to wait for. The bigger ticket they are, the longer you wait. Supply chains are disheveled. There is one quick way to hire and increase production: raise prices.

One other way of thinking about this story is labor inflation/wages. For the first time since World War II, government is the strongest competitor for low-priced workers. We are hearing from public companies, like Chipotle, and private businesses that we interact with that it is hard to source workers. Dishwashers are an example at restaurants. Bloomberg has been reporting that prices are going up and incentives are being offered. The reason is that the government is competing for those workers with stimulus checks. You can get paid for doing nothing. Why go in?

This is much like Buffett said on the UAW (United Auto Workers) contract. If housing costs, the cost of a car and the cost going to a restaurant are going up, it’s only a matter of time before workers make demands or companies that want their business to get back to full capacity hand out raises to pre-empt the need for labor. Below is a look at wait times for materials and supplies from the ISM.

It’s never been this bad in supply chains since 1987. You might want to buy a product and a company might want to produce it for you, but it will take them more time than in the past. The same goods produced in a longer fashion creates scarcity. Scarcities create pricing pressures. Buffett commented, “Supply chains all screwed up for all kinds of people, but it’s almost a buying frenzy.”

We will end this piece with a tip of the cap to Larry Summers as Buffett and Munger did. Summers was quoted on Bloomberg saying “These are the least responsible fiscal macroeconomic policy we’ve have had for the last 40 years. It’s fundamentally driven by intransigence on the Democratic left and intransigence and the completely irresponsible behavior in the whole of the Republican Party.”

As Munger and Buffett said:

Munger: “It’s not at all clear whether Larry is right or wrong.”
Buffett: “He’s a smart man, though.”
Munger: “He is a smart man. It’s courageous of him to raising it, too. He’s practically the only one talking that way, which I admire, by the way.”
Buffett: “Yeah. It guarantees he won’t get a position in the administration.”
Munger: “Yes. Well, that’s one of the reasons I admire him, not that there’s anything wrong with having a position in the administration, but I think people who kind of tell it the way they think it is, I like it.”

Over the last four years, we have argued that the glamour monopoly technology companies have a low multiplier effect in the U.S. economy. At the same time, home ownership and the creation of...

We are approximately six to twelve months into a bear market in stocks and bonds. This bear market is the natural consequence of the financial euphoria episode which preceded it. How do wise...

Bloomberg Markets: Cole Smead, CFA on Target and the US Consumer

Smead: Going to be Tough to Kill US Consumer By Alix Steel and Guy Johnson For more information go to www.bloomberg.com. Stocks mentioned: TGT The information contained in this article … Bloomberg Markets:...

Academics argue that there are three proven factors of investing: Value, quality (Asness’s QMJ) and momentum. For our discipline, we don’t believe we can add alpha in the latter. Momentum is a weird...

Barron’s: Bill Smead on the Next Generation

The Wedding Boom Is Hiding a Troubling Trend for the Economy By Sabrina Escobar For more information go to www.barrons.com. Stocks mentioned: TGT The information contained in this article represents … Barron’s: Bill...