There are many ways to practice value investing and many ways to add value to your stock selection. We refer to ourselves as contrarians because we do not allow the crowd fears to deter us. This perspective enables us to enter at lower prices on good quality securities when there is some form of tribulation surrounding an industry or company. In today’s missive, we would like to discuss the tribulation arising out of political scrutiny and the sectors or companies suffering at the hands of political football.

In the aftermath of the financial meltdown in 2007-2009 and the slow recovery which followed, there has been an explosion of populism from both sides of the US political aisle. President Donald Trump, Senator Elizabeth Warren and Senator Bernie Sanders are the three most well-known political leaders to have played to popular notions in the process of either seeking the Presidency or getting re-elected to the Senate. Which sectors and companies have been targeted by political pressure and what has been the result?

The sector most heavily impacted by the aftermath of the financial crisis was financials, and the companies most directly targeted were the big banks. From the bottom of the financial crisis until today, banks we have owned like Bank of America (BAC), JP Morgan (JPM) and Wells Fargo (WFC) have been among the most well-worn footballs in all of politics. If you listened to many politicians like Senator Warren, you would have thought that dealing with a bank caused cancer in laboratory mice. The stigma of being political footballs has never fully worn off these companies as they remain very cheap relative to the rest of the stock market. As highlighted in the chart below, since we committed to these stocks back in 2012, in aggregate they have added value for our shareholders: 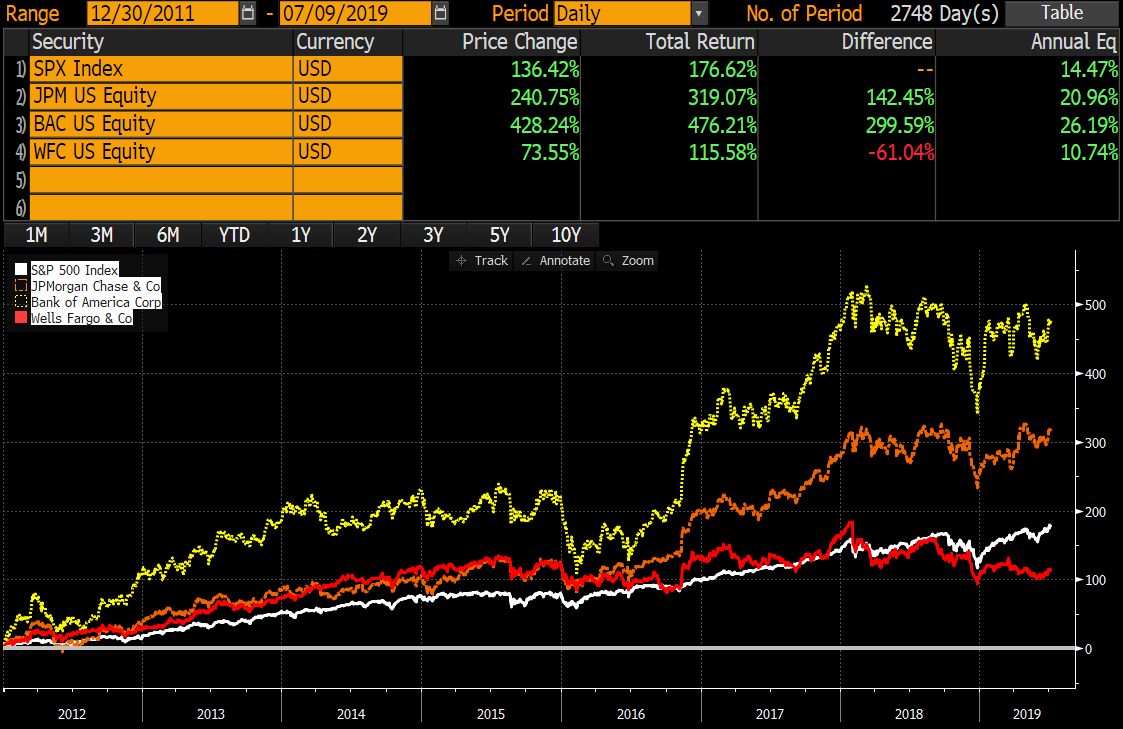 Over the last six decades the tobacco companies, TV networks and a multiplicity of energy-related firms have been kicked around by politicians. The irony is that Altria (MO), the old Phillip Morris Company, has been one of the best performing stocks on the NYSE over the last sixty years. The great investor, Peter Lynch, built his record-setting track record around owning Phillip Morris shares from 1977-1992. He said he liked to own a company that had a stigma attached to it which stopped it from ever getting very expensive. If Lynch were around today, he would love the banks for the same reason.

Which sectors are getting kicked around the most by the politicians today and might offer above average value besides the banks? The top of the current list would be healthcare, and the most direct targets are the pharmaceutical and biotech companies. President Trump and most everyone on the other side of the aisle are demonizing the makers of medicine. They act like what we pay for pills is the biggest contributor to the high cost of healthcare. In truth, it is about 12% of the cost of healthcare. Therefore, even if you cut the price of prescriptions by 20%, you would only cut the costs of healthcare by 2.4%! However, most pills are taken by people 55 and older, which is the most likely age group to vote among all voting blocks. Hence the populism, or popular stance, is to cater to them.

The U.S. government, through the FDA approval process, requires an extensive process costing millions and millions of dollars to reach the market. Currently, it costs over a billion dollars to go through the entire process. The tradeoff is an extensive patent protection period in which the government hands the company a monopoly. If you reduce the financial success of the pharma/biotech complex, you would surely reduce the incentive to discover hard to find treatments for today’s most pressing physical maladies. Also, since hospital and emergency room visits are the most expensive and costly parts of healthcare, cost-benefit analysis on the medicines could easily argue that the medicine saves us money as a society when compared to the alternatives.

In a stock market trading at 16.7 times the expected profits of the next 12 months, it is not unusual to see pharma, biotech, drug distributors and pharmacy companies trading at below-market multiples despite having strong long-term track records. These companies have normally traded at premiums to the average stock because they generate very high returns on invested capital, devote an enormous percentage of annual revenues to research and development and produce prodigious free cash flow. They pay lush dividends and buy back stock religiously. Unfortunately, they have been kicked hard lately by politicians as calls for socialist approaches to healthcare increase. Jamie Dimon, Warren Buffett and Jeff Bezos, through their healthcare initiative, could get flagged for a 15-yard piling on penalty!

If not for the fact that healthcare companies are a favorite political punching bag, it is possible that stocks like Merck (MRK) and Amgen (AMGN) would be among the most popular stocks in the market. Merck has taken the lead in commercializing immuno-oncology treatments for cancer. Their product, Keytruda, is the most effective medicine for lung cancer and appears to put them in a position to lead in other major cancer categories. It is anticipated by some analysts to grow to a $17 billion revenue product in the next four years. The stock has done very well in the last couple of years, but trades at a reasonable price-to-earnings (P/E) multiple of 15.8 times 2020 estimates and pays a 2.6% dividend.

Amgen has an extremely effective and first to the market migraine drug (Amovig) and the leading medicine for combatting high levels of bad cholesterol (Repatha). Amovig reduced 10 migraines per month to a couple of mild headaches per month for thousands of participants in an FDA-approved study. Repatha, when taken with a statin, reduces bad cholesterol by 63% on average and reduces the incidence of major cardiovascular events by 20-30% as well. I might want to get it prescribed so I can have the blood of a marathon runner. Amgen trades at 13 times 2019 estimates of earnings and pays a whopping 3.1% dividend. Both Merck and Amgen generate massive free-cash flow and are buying back a substantial part of their outstanding shares each year. Amgen has shrunk their float by 55% over the last 17 years.

In conclusion, it is never fun for a sector to be a political football and get kicked around like the banks have been and the pharma/biotech complex is now. We relish our chances to make above average returns by using these circumstances to the advantage of our shareholder partners. Many times the populist politicians wear themselves out or move to fresh victims. In other cases, the success of the underlying companies could end up outweighing the well-priced concerns.

We believe one of the hardest things to do in common stock investing is to hold winners for a long time. This is especially true with what are normally cyclical industries. In our...