“Nothing is more dangerous than an idea when it is the only one we have.”

The word encore is a French word, meaning ‘again, some more’. We typically think of it as coming after a concert is over, where the band returns from backstage to play some of the most crowd-pleasing hits. As the stage temporarily goes dark, the band is encouraged by the masses to reemerge through their loud applause, cheering and chanting. When new to the American scene, the spontaneity of this phenomena would often result in multiple encores for an unrelenting crowd.

The stock market has put on quite a show over the last decade. Including dividends, domestic stocks have nearly quadrupled since the bottom in March 2009. Most of the crowd missed the best parts of the broader show, but that hasn’t stopped the excitement being built around the encore. It is typically the most exciting part of the show and we’ve all learned these tunes before. Even so, as the hit songs may fill the air, the contemplative part of the market is debating what future market leadership may look like.

As the French philosopher Alain points out above, nothing is more dangerous than a market operating exclusively on only one or maybe two ideas, which it has increasingly been doing. We see ample evidence that current market leadership is getting tired. We’ve highlighted the market’s narrowness in our recent writings, and we know we are at the tail end of the longest period where “growth” stocks have beaten “value” since 1929, doing so by the widest margin ever. The complacency that has been bred by low volatility has only recently been shaken, but only back up to historical norms for equity markets: 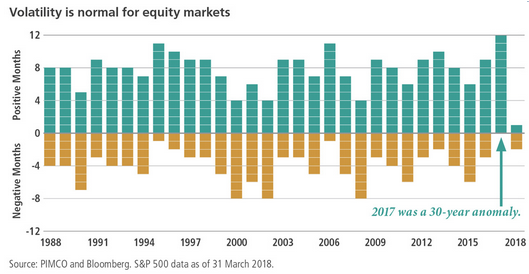 The challenge of a complacent one-direction market can be seen in the lack of sector outperformance persistency: 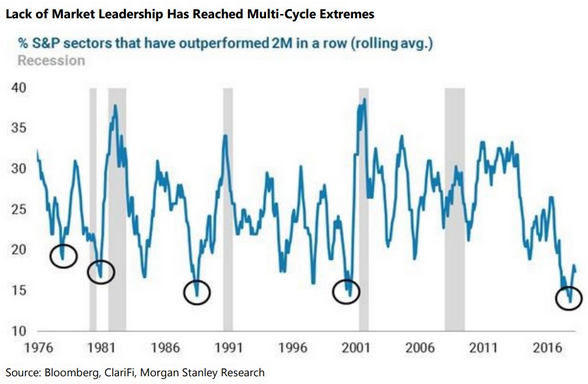 These hints of a leadership change are being offered at an opportune time for value investors. The chart below should look downright scary when considering that today’s levels of gorging on “growth” has not been seen since the tech-boom of the late ‘90s that gave us a herculean blow-off top. 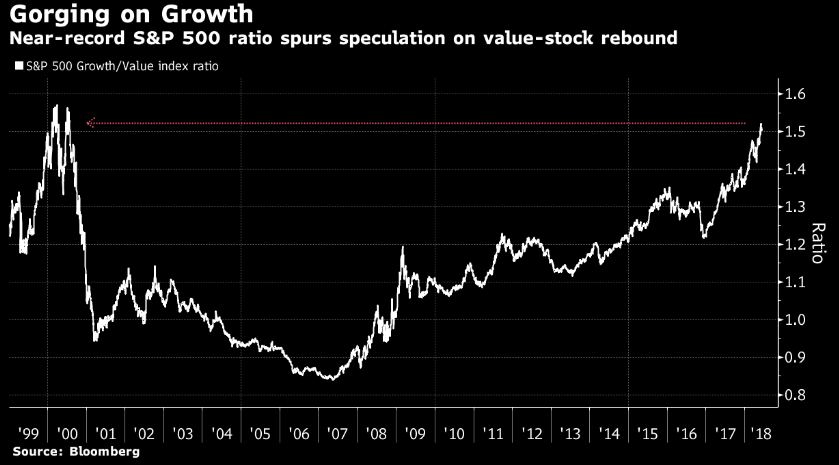 In a setup like this, it is critical to double-down on investment discipline, and avoid waiting for a final encore from the show we’ve just seen. We lean on our eight-criteria for stock selection, but want to offer five considerations for investment in today’s environment:

1) The endeavor of meritorious investing should not be to seek out comfort, especially at extremes. In other words, the easiest time to cozy up with overbought consensus is times like this when the world will treat you as a one-eyed monster if you see otherwise. Remember, this is not a popularity contest.

3) “Valuation matters dearly” is more than a Smead Capital Management mantra, it offers efficacy in investing! Consider that 71% of the time, the MSCI World Value Index has outperformed the MSCI World in rolling 5-year periods from January 1975 through April 2018. The current rear-view mirror is very misleading compared to what has normally worked in investing over time.

4) Conformity kills returns. The former CEO of Intel, Andy Grove, was once asked what was the best advice he’d ever been given in business. His answer was a professor at the City College of New York who taught him “When everyone knows that something is so, nobody knows nothin’.” We think the French philosopher would agree with Andy.

5) Buy stocks the same way you buy a new suit or dress. If it’s on sale, you’re more compelled to want to own it. This sounds basic, but in a world of $1,000+ stock prices that have done well lately, remember that doesn’t make them more attractive for new money, it makes them less attractive. Conversely, prices dropping for high-quality securities makes ownership more attractive.

The market sentiment has developed its fears of a global economic slowdown and has skepticism associated with interest rates rising too quickly. A recent CNBC interview with Berkshire Hathaway chairman, Warren Buffett, and JPMorgan Chase chief executive, Jamie Dimon, may offer valuable insight into what to think about this. When asked about their optimism on the economy, Buffett responded “Right now, there’s no question: It’s feeling strong. I mean, if we’re in the sixth inning, we have our sluggers coming to bat right now.” Clearly the market is not seeing these hitters coming to the plate.

We agree with this optimistic view and we want to own companies that will continue to benefit as the economy broadens to the last resident living on Main Street. We’ll do this by owning companies meeting identifiable economic needs with defensible value propositions around its products and services. We are especially attracted to these companies when they are on sale, or treated with outright investor discouragement. Today’s market environment has created wonderful opportunities to add to our positions in homebuilders, financials, media companies, health care, and certain consumer discretionary securities.

In our view, these groups are the next bands in the queue and we think their hit songs are quietly gaining traction. We expect bread-and-butter economics to be the theme over the next decade and we expect market leadership to come from companies involved directly or peripherally to the household formation activities that are in early innings right now.

Thank you for your continued investment and support.