The Law of Fashion

“Locke differentiates three types of law: 1) the law of opinion, 2) civil law, and 3) divine law (see fig. 7.1). The law of opinion refers to general precepts established by public opinion. It is the “law of fashion,” which may merely reflect what is in vogue or what is a group’s collective preference. In modern parlance we may call this “contemporary community standards.”
— The Law of Fashion, John Locke

The great philosopher, John Locke, brilliantly captured the way the world works. Little did he know that he would also explain how the stock market works, even though it barely existed when he came up with his philosophy. The stock market is driven by “the law of fashion, civil law and divine law.”

We have participated in the stock market since 1980 and we know quite a bit of the history of the prior decades. Each decade seems to have its own law of fashion. This means a “general precept established by public opinion.” It is the heart and soul of what John Kenneth Galbraith called “financial euphoria.” In the 1960s, the space race encouraged excitement about “Go-Go” growth companies. In the early 1970s, it was a group of 50 stocks (the Nifty-Fifty) which seemed to grow consistently and were rewarded in the marketplace of investors with highly fashionable price-to-earnings (P/E) multiples.

By 1981, stocks had done horribly as inflation soared and fashion surrounded businesses which benefitted from inflation. Five of the six largest cap companies were oil stocks and energy made up 29.5% of the S&P 500 Index. Oil, real estate and gold enjoyed the favor coming from the “law of fashion.”

In 1998-2000, the Dotcom Bubble controlled what was fashionable in the aftermath of the establishment of the internet, capping an amazing decade of success. Energy got back on its horse from 2000-2011, as the financial crisis boiled and China’s growth dominated what was popular. The last decade (2011-2020) has been the FAANG Era (Facebook, Amazon, Apple, Netflix and Google/Alphabet), as the dominant tech companies have reasserted themselves in the stock market. This is under the general precept that nothing can go wrong with them and how dependent we have all become on their products.

Occasionally, the U.S. government decides to get involved in the stock market via “civil law.” The Sherman Antitrust Act of 1890 broke up Standard Oil in the early 1900s, regulated the railroads and the telephone behemoth (AT&T), sued IBM in the 1960s, Microsoft in the 1990s and is preparing to go after Amazon, Google, Apple, Facebook and others. Here is the chart of IBM in the aftermath of running into “civil law” in 1969, when the Justice Department sued them and sought to break them up: 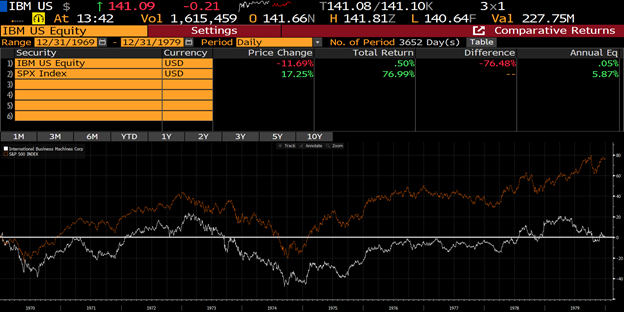 We have a rule when it comes to civil law in the stock market. When Senator Elizabeth Warren and Senator Josh Hawley agree on something, expect there to be civil law problems for the targets of their jointly held ire. Did I forget to mention Lina Khan, the head of the Federal Trade Commission, who is coming after the FAANG companies?

To us at Smead Capital Management, there are some divine laws which govern the stock market over long time periods.

The goal of our work is to avoid getting stuck as fashion disappears. We have no urge for getting beat up by our companies suffering from civil law moving against them. We enjoy using these divine laws to run our portfolios. Thanks to John Locke, we hope to avoid stock market failure.