Financial euphoria episodes are a common occurrence in investment markets and the U.S. stock market. When a new one comes along, market participants accelerate their enthusiasm toward the end, which makes the shares of companies involved dead to us. The new mania becomes comparable to prior episodes (see the chart below) and prepares to destroy the capital of those who extrapolate the existing trends and enthusiasm.

One of our favorite movies of the last 25 years is the thriller, The Sixth Sense. It is the story of a little boy, Cole, who is haunted by the regular appearance of dead people. He is visited by an expert psychologist, played by actor Bruce Willis, who hears the boy say, “I see dead people.” In the current stock market, we feel somewhat like the little boy because we see dead stocks. Dead stocks to us are ones which could spend ten years or more just trying to get back to the highs of the euphoria episode.

We regularly revisit the agony which comes in the aftermath of manic euphoria episodes in the stock market over the last 60 years, because we have no urge to own stocks which make us hide in the bedroom like little Cole did in the movie. Therefore, is the decline in the most popular tech stocks in the last four months a temporary interruption in their long climb to complete dominance of the stock indexes and the U.S. economy? Or is ownership of them a ticket to future misery? Do violent rallies along the way tell you anything about whether the stocks are going to be dead for a while? Lastly, what does this mean for stock pickers like us and asset allocators who need U.S. large cap equity exposure? Are you willing to be visited by ghosts?

There are two kinds of dead stocks late in a euphoric era. The first kind of dead stocks are the companies which gain heavy favor in the mania but end up being complete failures in their business, whose shares collapse completely. In the Nifty-Fifty mania of the late 1960’s and early 1970’s, the dead stocks which failed completely were names like Simplicity Pattern, S.S. Kresge (K Mart) and Polaroid. The dot-com tech bubble gave us Sun Microsystems, Lucent Technologies, AOL and a host of others which ended up in the dust bin.

The second kind of dead stocks are the share prices of the companies which succeed as businesses for decades to come, but the euphoria/excitement which became attached to them doomed the shares for ten to twenty years. Among the Nifty-Fifty which fit this description were Disney (DIS), McDonalds (MCD) and Coca Cola (KO). The stocks were dead for at least ten years and saw their price-to-earnings ratio (P/E) plummet from around 70-80 times to single digits in 1981-1982.

The most successful businesses from among the glamour euphoria stocks of the tech bubble were Microsoft (MSFT), Cisco (CSCO) and Intel (INTC). The P/E ratio based on 2000 fiscal year earnings at the end of the mania on MSFT was 65. CSCO peaked at a P/E of 222 and INTC topped out at 48 times profits of its outlier profit year, but it was 110 times the average of the three years surrounding its peak price. The profits and free cash flow of these survivor companies have grown massively over the last 19 years. Those earnings stats didn’t stop the common shares of these companies from declining by 65% on MSFT, 89% on CSCO and 82% on INTC. To think that numbers like this didn’t cause nightmares, leading index and growth investors to see ghosts, means folks have short memories. It took 16 years to get back to the old high on MSFT and you have never been back to the 2000 high on CSCO and INTC! Have you ever heard of purgatory? Little Cole had some contemporaries.

If these stocks were dead in 1999, long before they peaked, how did investors stay sucked into their morbid vortex during the main part of the death spiral in 2000-2002? The answer was many violent bear market rallies in these stocks on the way down. Here is the chart of MSFT during the worst of its decline: 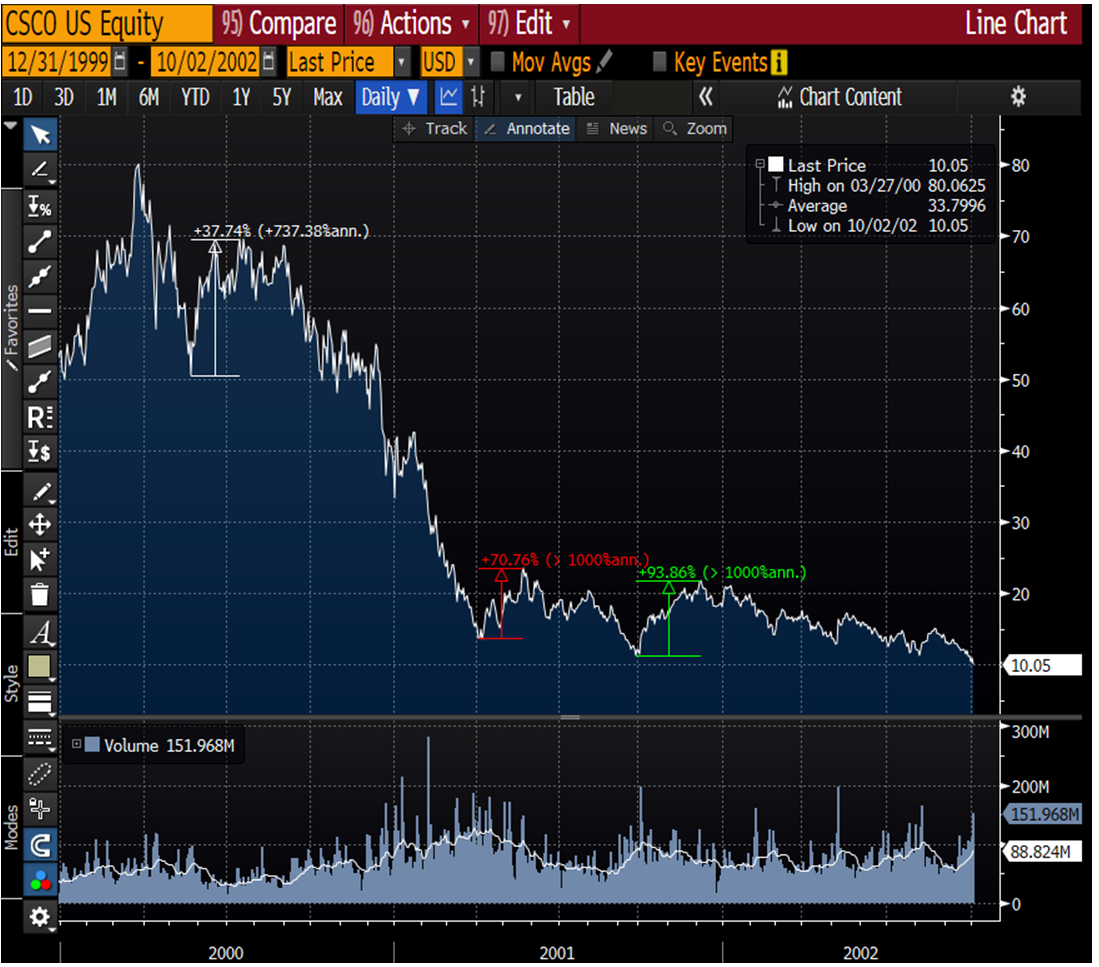 There were three bear market rallies of 38%, 71% and 94% on its way to the bottom. How could you have figured out that Bruce Willis’ character, the psychologist, was dead if he kept rallying like that in the movie? After all, he was giving the young boy great advice in his nightmares.

Intel was no exception to the rule. It had a 31%, 43% and an 85% gain inter-mixed with regular massive declines, which drove investors into a hiding place with a blanket pulled over their head. I can still see the tears of other people in the investment business who took the brunt of this abuse, and they didn’t even have Cole’s mother there to console them. 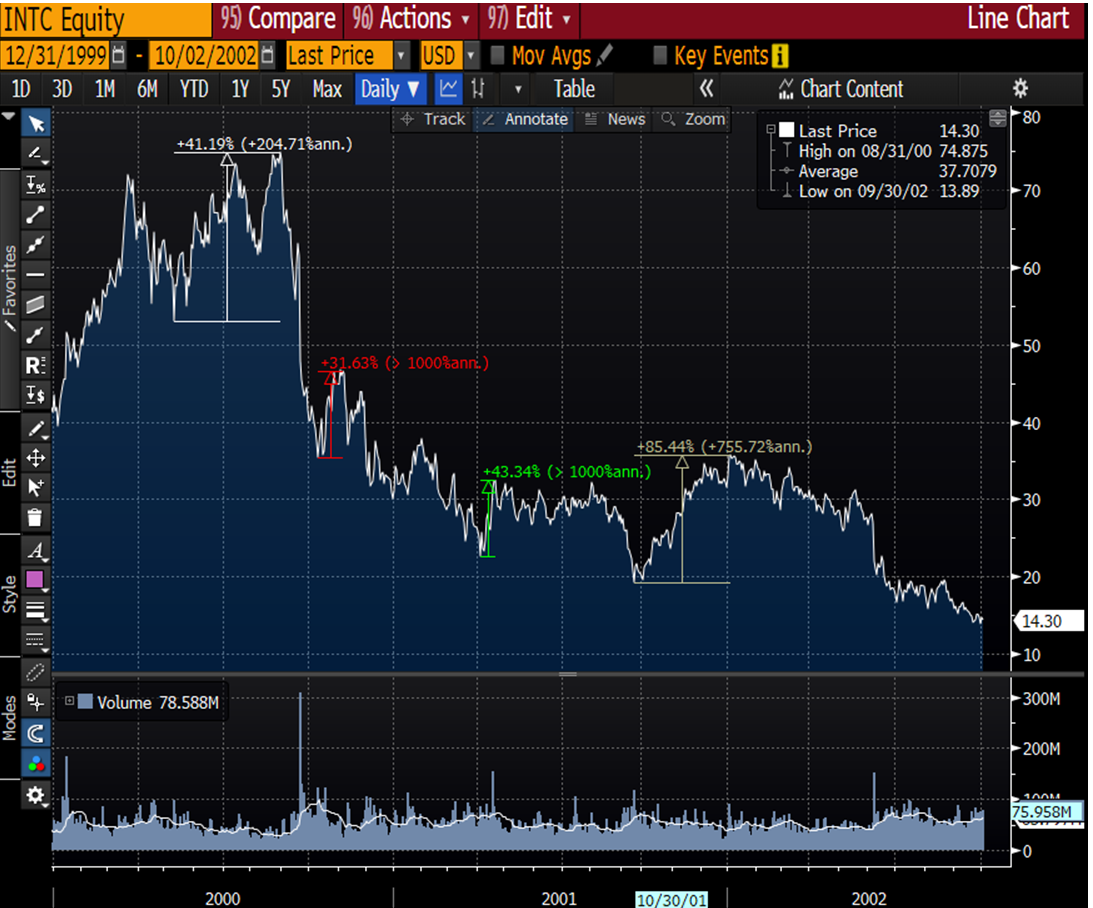 If today’s e-commerce glam stocks peaked last year as the multi-bubble chart shows they might have, could this current rally in shares of Netflix (NFLX) and Amazon (AMZN) be the one of the big rallies? Are these rallies part of the process of bottoming them for an extended purgatory period like the last tech euphoria episodes? Here are the charts of what has happened in these glam stalwarts since they peaked in 2018: 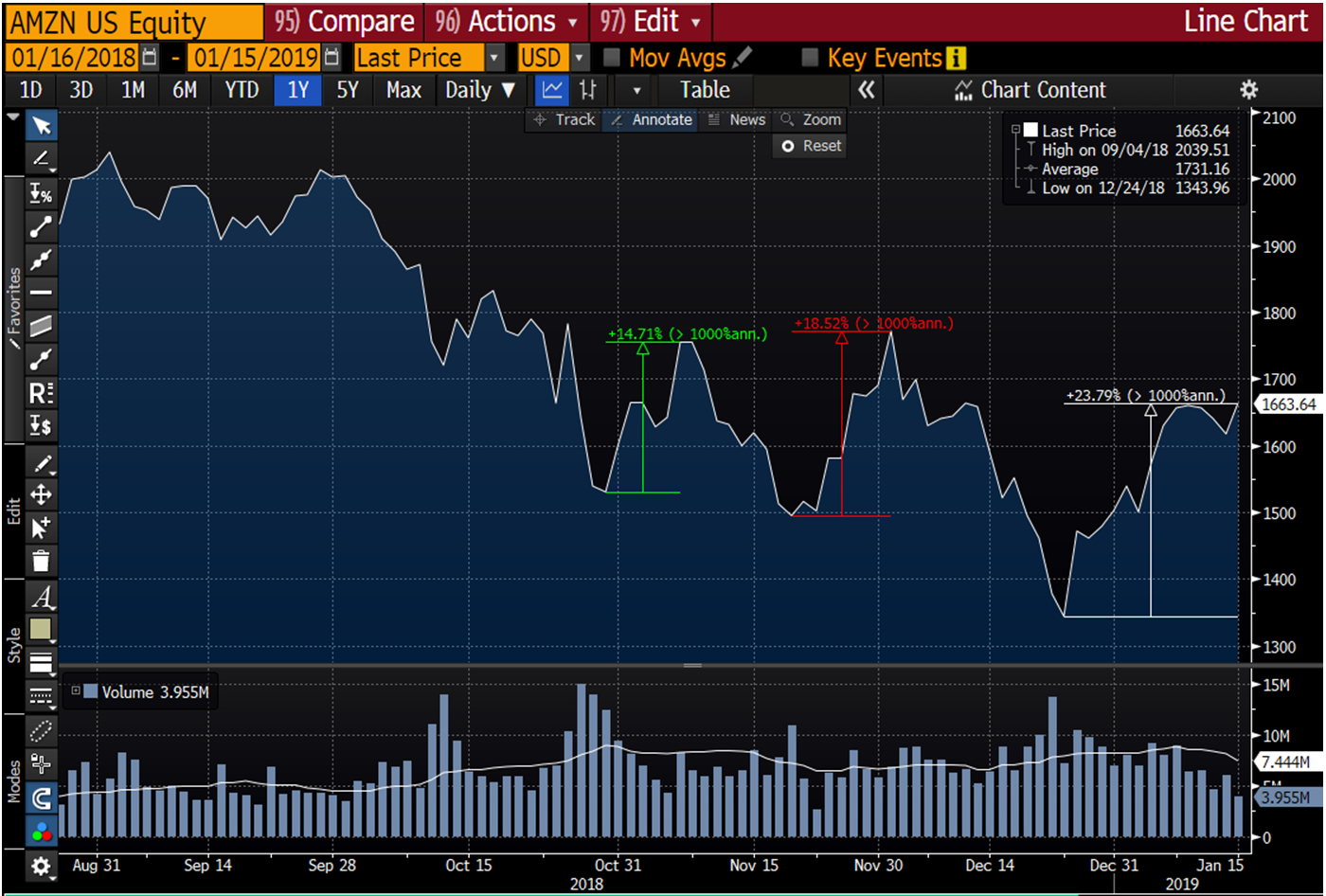 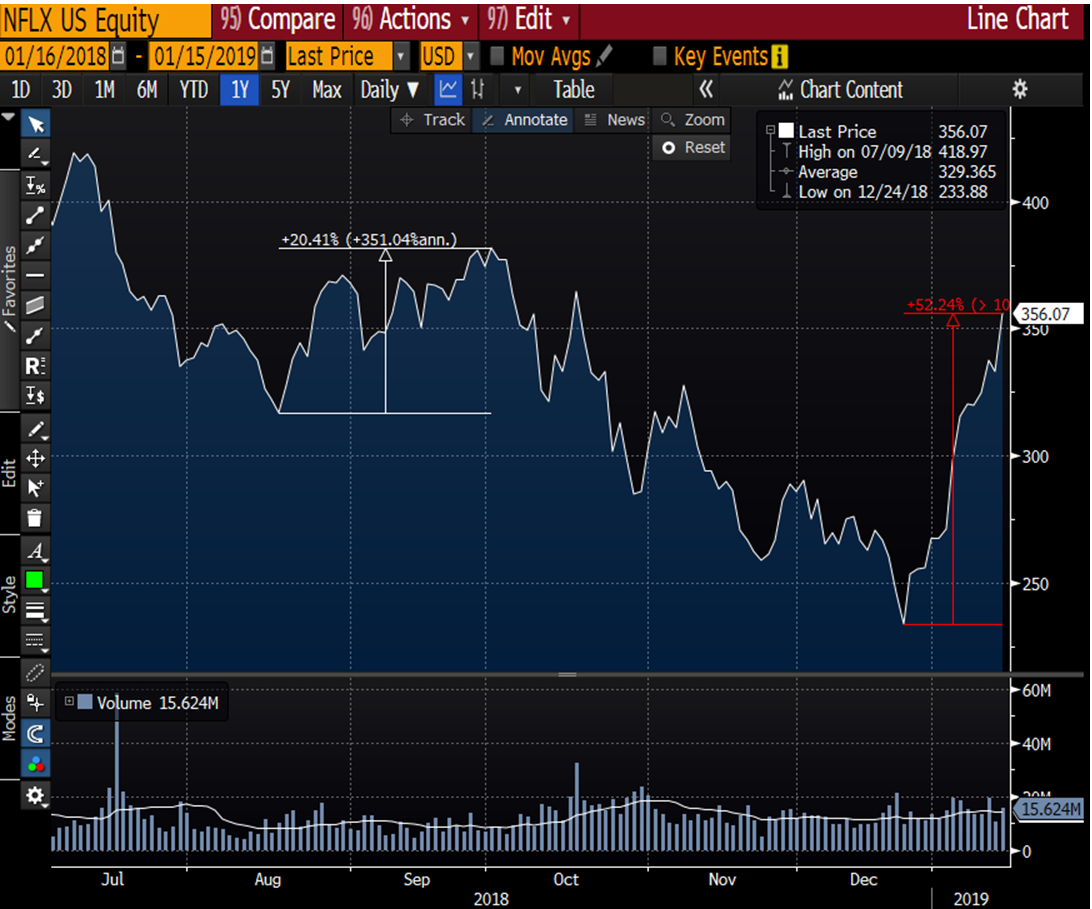 One of the ways that we can see a repeat of the tech bubble episode is the boldness that numerous industry experts and stock pickers are showing by recommending and being optimistic about the e-commerce glam stocks. This is the same way that dot-com experts and analysts behaved back in 1999 and early 2000. Fortunately, for many investors, most of those experts have found new occupations. Have you heard anyone in the media lately say anything but positive things about the glam companies? Our rule is that if everyone is calling an up move a bear market rally, it is likely a new bull market. If they are all viewing it as a minor interruption in a bull market and touting how much these favorites are going to go up, you need to crawl into your bedroom and pull over the covers, or at a minimum put on your headphones.

Unfortunately for us, we aren’t as effective at seeing dead stocks as little Cole was at seeing and interacting with dead people. There might be new heights to this financial euphoria episode — even higher than we’ve seen so far. We remember going back and watching the movie the second time to see if we could figure out that the psychologist was one of the dead people. Even then it was hard. Regardless, these glamorous stocks are not ownable by us in a discipline that avoids maniacal stocks like most people avoid ghosts.