Academia vs. The Real World – Part 2

We are revisiting our discussion of what the real world is like versus what academics claim in papers and debates. A good way of putting this is “Academia has a tendency, when unchecked (from lack of skin in the game), to evolve into a ritualistic self-referential publishing game.” In 1984, this is exactly what Michael Jensen did in his talk at Columbia University in a debate with Warren Buffett. We know that reciting more and more of your colleagues’ papers is the best way to win in academia. We seek to finish this discussion on what works in the real world.

During the run-up to Christmas of 1969, Warren Buffett decided to close his partnership and spent that time winding down the portfolio. Despite having the most successful year ever in 1968, he didn’t want to manage the partnership any longer. He had particular concerns for this which we believe must be talked about in light of today’s circumstances. We also want to look at what he advised his former partnership investors to do. We will examine what kind of a ride, understanding the ups and downs, was produced by the Sequoia Fund (SEQUX) in the aftermath of his advice. We believe all of this will help us think rationally as long-duration investors and help us set our expectations.

The Sequoia Fund was founded in a vacuum. The Fund was managed by Bill Ruane, a friend of Buffett’s who he met in 1950 at a Ben Graham seminar at Columbia University. In 1969, Buffett wanted out and dispersed the capital of his partnership to his partners. He sent them 40% of their money in Berkshire Hathaway and 60% in cash. For the former partners that wanted common stock ownership, he advised them to take this cash to Ruane’s fund that was launching in 1970. The greatest investor of all time made this fund recommendation. The ride wasn’t fun in the beginning.

Below is a table of the Sequoia Fund’s returns from July 14, 1970 to November 2018 month-end. We’ve noted the years of underperformance in red. As readers can see, the first four years were frustrating. Ruane did end up outperforming in 1974, but still lost double-digit amounts of capital in that year. From the launch in 1970 to the end of 1973, the Sequoia Fund underperformed by 47%, cumulatively. This isn’t a typo, underperformance of 47%.

Buffett had created huge wealth as a star manager for these investors. Imagine what the investors wondered as they suffered a landslide over four years with a new manager. This all sounds pretty lumpy. We could only imagine what the followers of Harry Markowitz were saying then or what they would be saying if that should happen now.

The great part is, it is happening now. Below is a table of the underperformance of the Sequoia Fund since its launch. The Sequoia Fund slugged out its early tough stretch to succeed fantastically during the decade of the 1970’s. Despite its rough patch to start, the Sequoia Fund grew a $10,000 investment to $38,691 by the end of 1979. The market only grew the money to $21,480. The investors were rewarded for what seemingly were insurmountable circumstances, 47% underperformance, in the eyes of today’s investor psychologists and academics.

Outperformance in a tough era like the 1970’s wasn’t unique to the Sequoia Fund. Last week we looked at Templeton’s track record and the lumpy ride it provided to its investors. The 1970’s were a great decade for it too, despite terrible starting performance against the market. Below is a chart of Templeton’s performance during the 1970’s.

What readers should be seeing in this discussion is that in a tough return era for stocks like the 1970’s, where the market only made 5.87% annualized (including dividends), stock-picking disciplines like Sequoia and Templeton did well.

So, if the 1970’s were going to be a great era for stock pickers, why did Buffett want out?

“In the late 1960s, there was just a flood of accounting shenanigans and mergers built upon false accounting and misleading people,” Buffett said. “It was a time when a lot of charlatans were prevailing on Wall Street and were being applauded by Wall Street. And I understood what the game was about but I didn’t want to play in it.”

Warren thought the environment was terrible in the late 1960’s, despite the fact that he felt that he could add value. He didn’t quit investing. He instead chose to be less diversified by taking single stock risk in a bad era with Berkshire Hathaway. He was willing to accept a lumpier ride to produce his success, not a smoother or more diversified ride.

How does this help us today?

We like to think we are on a 10-year voyage. We don’t know what the ride will be like, but we believe that it is likely to be lumpy. However, we do have a high level of confidence in what our competition, the passive index, will do because there are many rhymes with the late 1960’s currently.

First, starting with Buffett’s quote above, there are “a lot of charlatans” on Wall Street today. Today’s form of “charlatans” are enthusiastic believers of newfound ideas in commerce on the corporate front. On Wall Street, it is camps of expensive stock apologists who tickle the ears of people. If you are looking for financial shenanigans, you need to go no further than stock-based compensation programs or smoothed content spending that’s allowable under GAAP. We believe we understand “what the game” is, but we don’t want to play in it like other market participants do. We don’t quit investing. We just invest less diversified than others.

Secondly, consumer confidence is high just like the late 1960’s. Below is the chart.

High levels of consumer confidence are inversely-related with the forward level of stock returns.

Lastly, below is a chart that the Federal Reserve publishes. It shows the percentage of U.S. household assets in stocks. 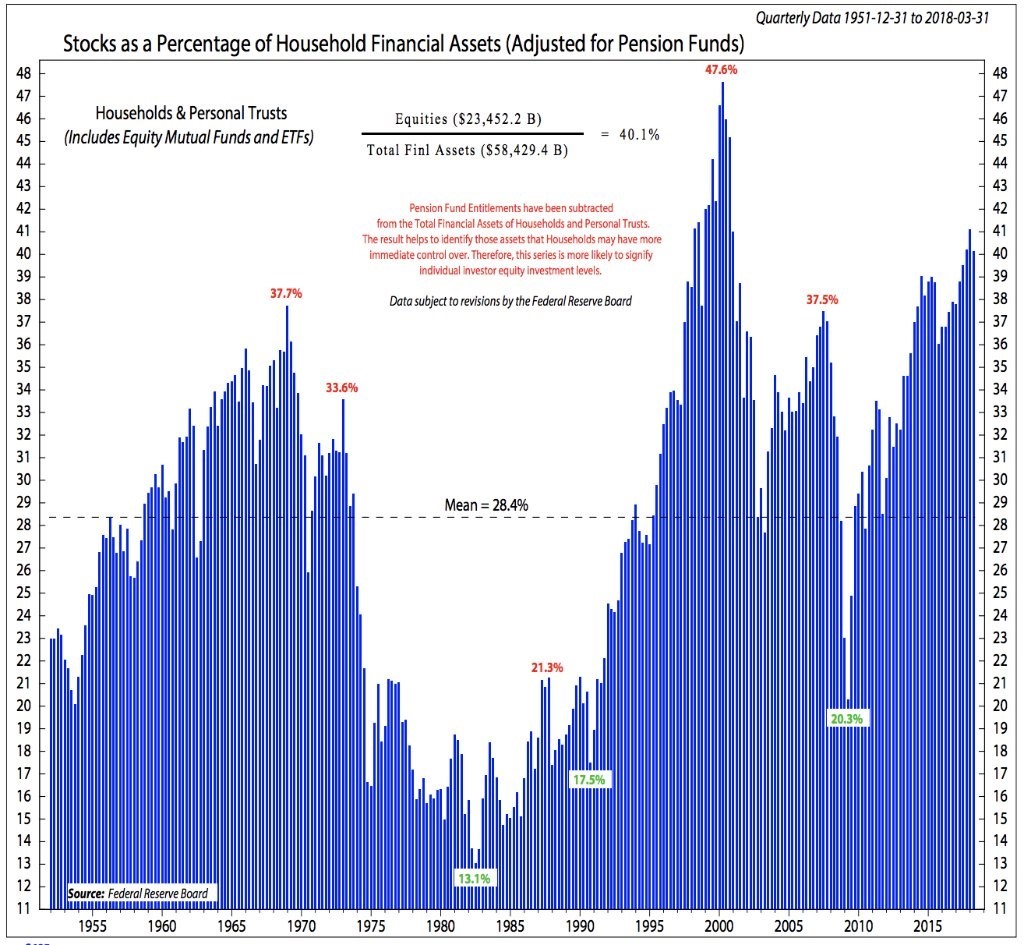 When U.S. households own a high percentage of stocks, forward returns are low. We are in a similar situation right now.

To bring this all together, the ride isn’t the important part. Academics and naysayers will disagree with our position. We at Smead Capital Management think about it like Buffett did. We would rather accept a lumpy ride without knowing our benefit, than smoothly match the benefit of the market with its historically-likely low returns. This is what we believe we have in common with Templeton, Sequoia and their investors. The academics may disagree with how we choose to deal with this, but the real world will decide. As Buffett said in 1984, “those who read their Graham and Dodd will continue to prosper.”