My recent reads have been stuck in the 1960’s, including Adam Smith’s The Money Game and Andrew Knowton’s Shaking the Money Tree. Both are fascinating reads into the psychology of the 1960’s. They are not looking back like John Brooks’s The Go-Go Years (a good read as well), but instead share with the readers exactly what investors were thinking at the time. The 1960’s didn’t set up investors for the decade they thought they would get. Instead, it gave them the 1970’s. The success ahead was an illusion in stock returns, not corporate growth. I’d like to use this piece to look at some of the illusions that will stalk investors and produce stock market failure in the next decade.

This has been an idea peddled by a handful of investors and strategists over the last few months. The idea is simple. The Spanish Flu ravaged the world from 1918 to 1920. We followed that pandemic/economic problem with a decade of stock market returns that was one for the ages. U.S. stocks returned 15%-16% compounded during the decade. Dividends produced over 40% of that decade’s total return, compounding at 6.3% annualized returns in dividends alone.

Let’s take a look at today’s market. Yes, we’ve had a pandemic that has shaken up consumers and the world economy. Today’s S&P 500 dividend sits at 1.4%. From this starting point, it would take an act of God to produce returns from dividends yielding 6.3% compounded over the next 10 years. For believers in this, my best recommendation is prayer. A four to five-fold increase in dividends has never happened in a decade. Further, Robert Shiller’s CAPE Ratio started the decade from low places in 1920. We can’t say that today. As you can understand, we think this theory is adorable.

There are unstoppable businesses out there

Mark Hulbert wrote a great opinion piece on May 20, 2021 for MarketWatch where he quoted some of the work done by Vincent Deluard at the investment firm StoneX. Mr. Deluard analyzed 351 companies in the Russell 3000 that traded for more than 10 times sales. In comparison, the price-to-sales ratio for the S&P 500 Index is 3.0. He then looked at the unstoppable businesses out there: Microsoft, Apple, Google and Amazon. He noted these companies have grown revenues at 26% annualized on average over the past 17 years and trade at price-to-sales ratios averaging 6.4.

Deluard then made the assumption that the 351 companies in the Russell 3000 would produce similar success over the following 17 years, like the unstoppable businesses above (26% annual revenue growth) and fall to a price-to-sales ratio of 6.4 as well.

Using a discount rate of 10% to calculate the present value of what these 351 companies would be worth in 2038 under his assumptions, Deluard found that 59 of them already have higher market caps. In other words, “the market currently expects that almost 60 companies will be more successful [over the next 17 years] than Microsoft, Apple, Google and Amazon [have been over the last 17].”

As Deluard notes, this is more like the Nifty Fifty than any other point that we’ve seen in stock market investing. To help investors see how real this illusion is, we pulled the excerpt below from Knowlton’s book when he talked about Simplicity Patterns in 1970:

Simplicity Pattern has made itself the dominant company in a $2-billion industry—the home sewing industry.

Of the more than 300 million garments made at home in 1970, Simplicity’s patterns were used to make more than half. Simplicity markets patterns for all ages and all degrees of sewing talent. It publishes several magazines that aid in the promotion of its patterns—magazines relating to the latest fashions, instructional texts, teaching guides, and a monthly news bulletin. Twice yearly it publishes a catalogue. Because this company saw consumer need and created a unique market, it now earns more than 20 percent on shareholders’ equity and 12.7% percent on sales after taxes.

It’s so funny to read this. Simplicity’s booming sewing business was producing 20% return-on-equity. Some would say this was a moat and that a high level of return could be sustained far into the future as sewing didn’t look like it was changing for a long time. For a millennial, this is hysterical to even fathom. Lubrizol, Xerox and other names like it were companies that people dreamed about. Now, we chuckle at the thought of what happened then.

The participation of investors today is a good thing

The old saying is that dogs chase cars and people chase stocks. Today, some have made the case that we are introducing a new group of investors to the stock market. The belief is that this is a good long-term thing. While all should take a go at stock market investing. The reality is that most investors become poorer in the stock market compared to holding T-bills.1 The comfortability of investors to own or buy stocks new right now is a bad thing for S&P 500 Investors. Below is a look at the household ownership of stocks and the inverted forward 10-year returns of the S&P 500. 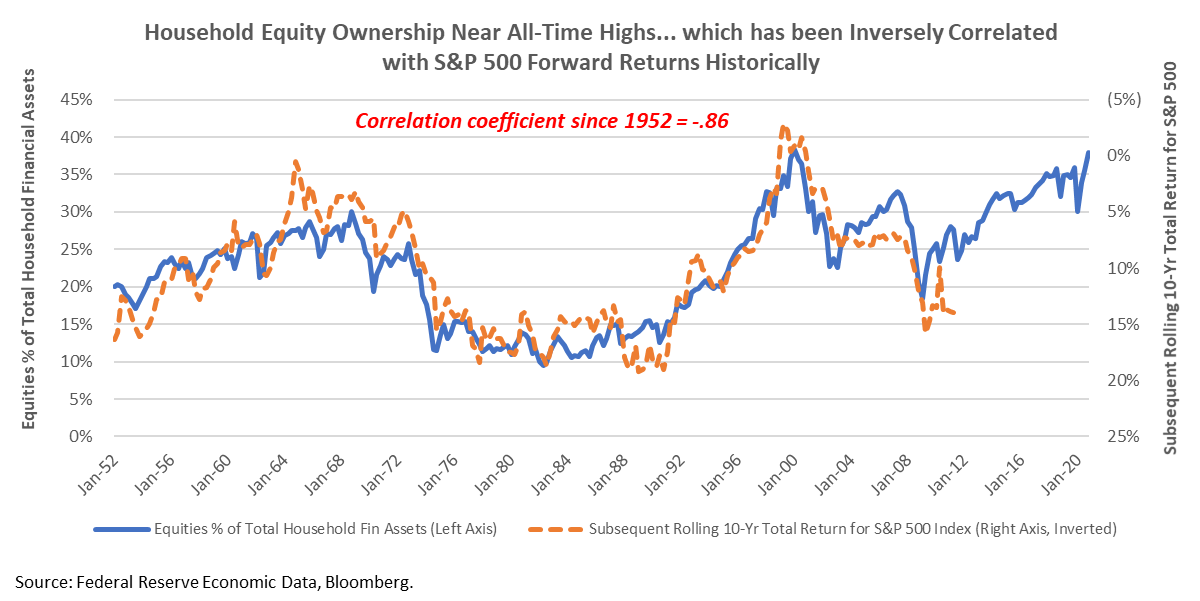 As we stare at this chart, we can see that high levels of ownership in the past have produced poor nominal and/or real returns going forward. We’re glad millennials are cognizant of the stock market. Warren Buffett says the stock market was created to move money from impatient people to patient people. Maybe we should give them, yet again, another participation trophy.

As we add these three together, we believe investors are staring at illusions. We want to warn our investors to be thoughtful of long-term prospects and the proclivity of humans to see the future and become a euphoric mob at an extreme time. We advise investors that fear stock market failure. We believe Knowlton did provide a good framework in 1970 for today:

Second, we have never believed it made much sense for the investor to ‘play the market’ as a whole. Instead, we stress selection of soundly financed, carefully managed companies in relatively promising businesses. This approached has served investors in good stead indeed historically, even during the last seven years, despite unforeseen turmoil in virtually all domestic financial markets. We believe such selectivity – a word that tends on Wall Street to become a cliché rather than a discipline—still holds the key to future success.

Be selective and fear stock market failure. These circumstances may end up showing a majority of investors were delusional.